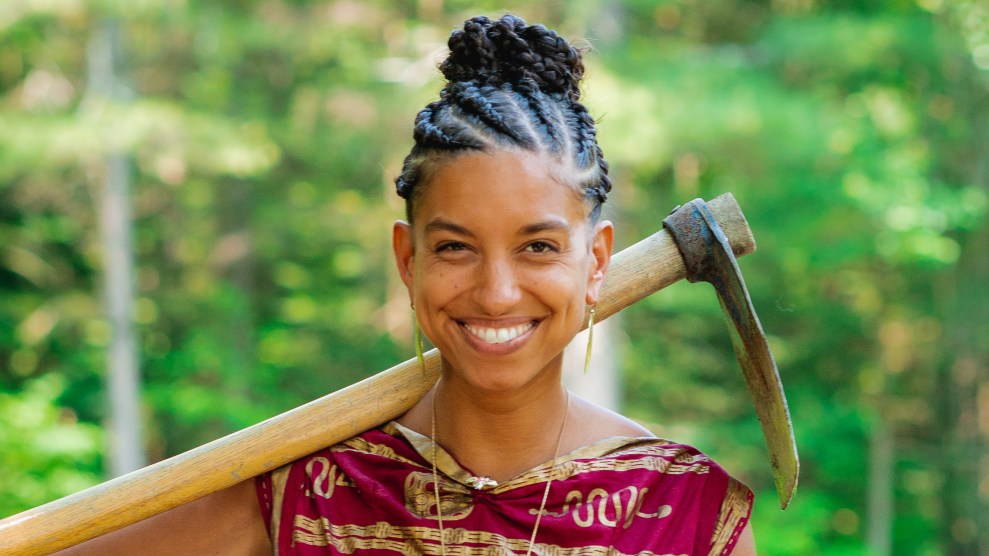 Leah Penniman, 38, never thought she’d become a farmer. “I had bought the myth that we as black folks are just not interested in farming, and that that was by choice,” she said.

But her attitude shifted in her teen years, when she passed by a flyer advertising summer jobs for the Food Project, a program in eastern Massachusetts that trains young people to grow food and distribute it to hunger relief organizations and farmer’s markets. After a summer in the soil, she was hooked.

And after more than 20 years of growing food all over the world, she realized that it wasn’t a lack of interest keeping African Americans out of agriculture—but instead historical exclusion, discrimination, and intimidation. “A lot of farmers and networks have talked about how their white neighbors don’t want them around and so their animals disappear, they get cops called on them or unexplained damages,” she said. “Because of fear of aggression, a lot of elders are giving away their lands.” On top of that, she felt like an outsider at farm conferences with mostly white participants, and training programs that left out black and indigenous techniques and traditions.

In 2011, Penniman co-founded Soul Fire Farm, a 72-acre farm in New York dedicated to ending racism and injustice in the food system. And this month, Penniman published her first book Farming While Black: Soul Fire Farm’s Practical Guide to Liberation on the Land —part history, part memoir, and part technical manual for farmers of color. “It was a book that I really needed as a young person to assure me that I had a place in the movement and belonged and wasn’t some kind of outsider peering in, or a traitor to my people,” she said. I caught up with Penniman to hear more about the history of black farmers in America and the growing support system for farmers of color.

Hear Leah talk about the African roots of modern American farming practices on this episode of Bite:

Mother Jones: Your book is incredibly expansive, covering everything from farming techniques to moneylending information to harvest prayers. Why did you feel like this book was necessary?

Leah Penniman: As someone who’s been growing food and working in the food justice space for over 20 years, I had yet to encounter a book that used “we language” around black and brown farmers that wasn’t a requiem for us. It was a healing process and an intellectually satisfying process to take all of the things I thought I knew about our people and to find resources and references, put them into prose, put them into stories and fill those gaps in the knowledge in the literature for our community.

“I had yet to encounter a book that used ‘we language’ around black and brown farmers that wasn’t a requiem for us.”

MJ: What do you mean by “we language”?

LP: Quite literally first person! The book, when it talks about black farmers, talks about “us,” and “we,” and “I” and while the book certainly is for everyone—racism isn’t just a black problem—we all need to work together to create a just and equitable food system. I really want to make sure that this book was centering the stories, needs, ideas, and expertise of black farmers because we’ve been so ignored and told that the only relationship we have with land is through slavery and sharecropping. This is who we are, these are who our ancestors are, these are our practices, not somebody else’s, and not talking about us through an anthropological sterile lens, but really through a warm, familiar, and welcoming tone.

MJ: What were some of the things you included in this manual that you wish you had known just starting out?

LP: To actually understand the history of racist violence against black farmers—both from the side of the government with the United States Department of Agriculture discriminating against black farmers, and also the outright violence of the Ku Klux Klan and the White Citizens’ Council towards “uppity folks” who were trying to own land and not work on plantations—would have been very helpful because it makes me feel like less of an alien, less of a weirdo, as someone who wants to be connected to the land. From the more farming-techniques side of things, there’s so many practices that I was taught as a farm apprentice that have roots in African and Indigenous practices—I also wish that I had been exposed to that as a young person.

MJ: What are some of the biggest barriers to decolonizing farming?

LP: Access to land for sure. At the peak of black land ownership in 1910, our community held 16 million acres and almost all of it is gone—and not by choice. And then correspondingly, capital and resources. And then I would say the third thing is culturally relevant training. We need extension agents in urban communities, we need land grant colleges in urban communities.

MJ: The book as a whole is a testament to community building; what are some of the ways that Soul Fire Farm gives back to its community?

LP: All the things we do are very much in response to what the community is asking of us. Even right now, we get like 20+ emails a day: “we need mentorship, support, resources.” So I created this concept of a monthly Zoom/Skype info session so we can answer more questions.

We’re growing food in a regenerative Afro-indigenous manner and providing it to 100+ families who need it the most. We center on refugees, immigrants, and people impacted by mass incarceration, and people can pay whatever they can afford. Literally providing sustenance in the community is the most important thing. For many years, we had a program that was a diversion from juvenile detention. Unfortunately, the county shut down that program, but we still work with those who could be at risk for the school to prison pipeline to provide a space that is affirmative of their worth and shows them the possibility of being able to attain their dreams. When they see mentors who look like them, who aren’t necessarily working for corporations or aren’t locked up, that hopefully opens up possibilities of agency.

MJ: In the book, you talk about concrete ways of reparation for the damage done by slavery and its aftermath. What are some of the ways to adjust the balance?

LP: “Reparations” and “repair” have the same root word. It’s about feeling what’s broken in our communities in terms of racial justice and equity and access. You look at the Homestead Act—who got the land? The New Deal—who got those jobs? And Social Security, there was a categorical exclusion of black and brown people. Reparations is about giving that accumulated wealth back. It can happen by governmental decree, and certainly has happened in different places in the world. In the meantime, we’re also encouraging people-to-people reparations. We connect people of color led organizations and planning projects and seeing what they need. We created a reparations map, which folks can check out at our website.

MJ: Let’s talk about the recipe portion of the book. You describe meals that are made from what you grow, and they are recipes rooted in tradition. What is one of those recipes that you absolutely had to include?

LP: In addition to being delicious and possible to prepare with the foods we grow on the farm, these recipes are also special because many of them have a history like “soup joumou,” which is my favorite food. It was created during the successful revolution in Haiti in 1804, because prior to that, enslaved Africans were not allowed to eat the joumou pumpkin. It was like a delicacy and they could only make it and serve it to the French plantation owners. Upon liberation, the way to celebrate was to make this soup and eat it and enjoy it. We commemorate freedom at the same time when we enjoy all these delicious vegetables.

Coat the squash/pumpkin in oil and roast until golden brown and tender. Simultaneously, in a separate pan, roast the remaining vegetables (except the corn, parsley, and hot pepper) in oil and a bit of salt until golden and tender. Blend the cooked squash with the coconut milk in a blender or food processor, then add this to the water in a medium stockpot and bring to a low boil. Stir in the roasted vegetables and the corn, parsley, and hot pepper. Add spices to taste. Cook for 15 to 20 minutes to blend the flavors. If you are using pasta, add it when there are 10 remaining minutes of cook time.
Note: The squash and hot peppers are essential ingredients. All other ingredients can be replaced with similar vegetables that are locally available.

This recipe is taken from Leah Penniman’s book Farming While Black (Chelsea Green Publishing, November 2018) and is reprinted with permission from the publisher.