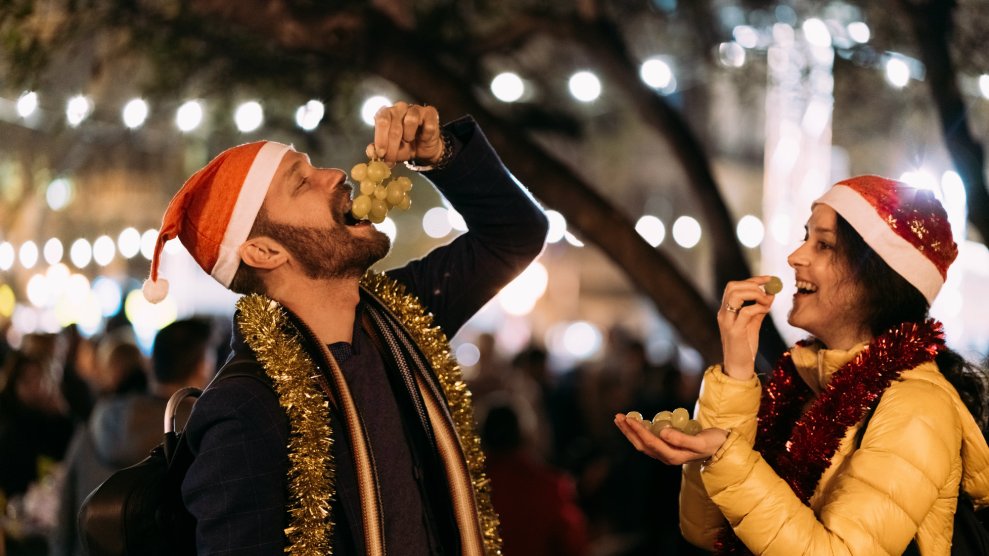 Every new year, just 12 seconds before midnight, Citlali and her family enact the same tradition: For every second that ticks by, they eat a grape and make a wish. It’s an old Spanish custom that’s meant to bring in luck for the new year. Citlali, a high schooler in Boston, Massachusetts, tells me that her Mexican American family has been doing this ever since she was a little kid. “It’s a great tradition,” she says, “and I think it’s symbolic because it’s a group wish where we hope for each other’s wishes to come true.”

Citlali, who only wanted to use her first name, says that like many other families, her parents use the holidays as a chance to spend time with each other and catch up. They make rice and beans and tamales, and lately, Citlali says she’s been trying to incorporate more of her culture into the season by making piñatas, stuffed with candy and toys for her cousins. “I wanted to do something on my own, and especially because there’s not much of a Mexican population in Boston,” she says. “This country is full of immigrants, so it’s important that we show ourselves and say, ‘Hey this is what we do.'”

For Thanksgiving, I reflected on some of my first times celebrating American holidays as an international student in the United States, and asked Mother Jones readers to share some of their experiences. We heard from readers and staff about the ways they’ve blended their own culture and backgrounds into their celebrations, from the cuisine they put on the table to the rituals they perform each year.

Food was a common theme and an area where many mixed tradition. One reader in Georgia, Lopa Bhattacharjea, says her Bangladeshi family always had turkey at Thanksgiving. Instead of roasting it, however, her parents ask the butcher to cut the turkey into chunks, so they can make a traditional Bengali curry. Lake San Kay, in a Facebook comment, tells us that she makes potica, a type of sweet bread, using a recipe her Yugoslavian grandmother taught her. “I honor my Gram and my great gram Katrianna, who taught her [the] tradition.”

Mother Jones staff also weighed in: Cathy Asmus, our development associate, tells me that her grandparents’ experience of immigrating to the United States has always informed how they celebrate the holidays. After coming to California in the 1930s and ’40s, her grandparents were sent to internment camps at the end of World War II; they eventually resettled in a Sacramento neighborhood, mainly populated with other Japanese immigrants. “Despite the challenges and alienation that colored their initial experience of America, they still fought, like many families, to assimilate as much as possible,” she writes. Still, they’d find ways to add a Japanese twist to the holidays—though there was turkey and pumpkin pie at Thanksgiving, her family would always add Japanese accompaniments, such as rice, persimmons, green tea and Japanese sweet potatoes. For New Year’s, they would make sushi from scratch, preparing maki rolls in addition to inari, deep-fried tofu pouches stuffed with rice.

Though they celebrate less now that her grandfather has passed away, Asmus says she plans on continuing the tradition with her own family in the future: “They are such a central part of my identity and signify for me everything the holidays stand for: family, comfort, festivity,” she writes. And, she adds, they are important to her in part because her grandparents didn’t share much about their backgrounds: “An unfortunate bedfellow of the desire to assimilate is an instinct to bury cultural markers. My grandparents did not want to teach me Japanese, they did not want to bring me with them to temple, they didn’t like sharing stories of their lives before coming here…So I consider these traditions and this food to be something I could share with them.”

While traditions may change over time, they can still survive in other ways, says Gina Pattacca from Columbus, Ohio. Pattaca’s mother, who came to the United States from Giulianova, a small coastal town in Italy, would cook up a storm for the holidays, setting out a feast that included homemade lasagna, fettuccine and meatballs, wedding soup, and roasted red pepper salad, in addition to a spread of desserts. “There were actually many other things too numerous to mention, all of it washed down with homemade wine, Italian liqueurs such as anisette and Strega and espresso,” writes Pattaca, 65.

Nowadays, Pattaca says that working full-time jobs has meant that she and her sisters have pared down the tradition each year. “Oh, how far we have fallen,” she joked to me over the phone. Still, Pattaca and her husband try to do something, however small, every year. And, she notes, “I still have such wonderful memories of those warm, loving celebrations of long ago.”