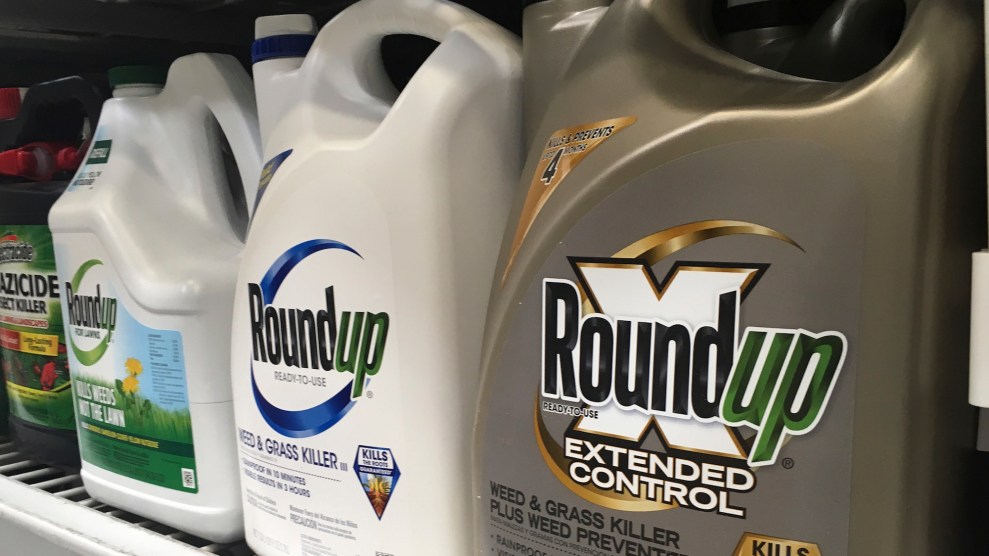 On Monday, a jury in a California state court handed German chemical company Bayer its third straight loss in a series of lawsuits claiming the company’s glyphosate-based Roundup herbicide causes cancer. Glyphosate-based herbicides are the most commonly used weedkillers in the United States and worldwide, and they are widely used on farms, lawns, and in all manner of landscaping. The case involved a married couple named Alva and Alberta Pilliod, who have both been diagnosed with a rare cancer called non-Hodgkin’s lymphoma. After they argued that their regular use of Roundup led to their cancers, a jury handed them a total of $55 million in compensatory damages—and a stunning $2 billion in punitive damages.

The decision, which Bayer quickly vowed to appeal, comes on the heels of a March ruling in a California federal court, when a jury awarded Edwin Hardeman $80 million in damages based on his claim that his regular spraying of Roundup on his land led to his non-Hodgkin’s lymphoma diagnosis. In another decision in August 2018, a California state court jury awarded school groundskeeper $289 million in damages after ruling that Roundup exposure had caused his cancer. The award was later reduced to $78 million—roughly equal to the damages decided in the Hardeman case.

Bayer’s share price has plunged since the company finalized its deal to buy Monsanto in June 2018.

The $2 billion blow delivered by the jury Monday will likely be reduced as well. Reuters reports that US Supreme Court rulings “limit the ratio of punitive to compensatory damages to 9:1.” Given the $55 million in compensatory damages, punitive damages would be capped at $495 million.

That’s cold comfort to Bayer’s shareholders, who have seen the company’s share price plunge since the company finalized its deal to buy US seed and pesticide giant Monsanto in June 2018. Thousands of lawsuits alleging Roundup’s link to cancer still loom in US courts. Monsanto debuted glyphosate in 1974 under the brand name Roundup, and later developed blockbuster corn, soybean, and cotton crops genetically engineered to resist it.

In Monday’s case, Judge Winifred Smith instructed jurors to consider whether “Roundup’s failure to perform safely was a substantial factor in causing Mr. Pilliod’s and/or Mrs. Pilliod’s harm,” and whether “lack of sufficient warnings was a substantial factor.” The judge noted that punitive damages are intended to  punish a wrongdoer for the conduct that harmed the plaintiff and to discourage similar conduct in the future,” and should only be awarded if “only if Mr. Pilliod and/or Mrs. Pilliod prove that Monsanto engaged in…malice, oppression, or fraud.”

At a meeting in Bonn, Germany, in late April, 55 percent of Bayer shareholders voted for a no-confidence resolution decrying the company’s management over the past year. Their main complaint: the decision to buy Monsanto and its Roundup liabilities. With three decision down and thousands of more cases teed up, pressure will be on Bayer’s management team to find an out-of-court settlement for these cancer claims.

But “reaching a settlement in the case is complicated by the fact that the product continues to be sold to consumers and farmers and doesn’t carry a cancer-warning label, which means the potential pool of plaintiffs could expand indefinitely,” the Wall Street Journal reports. “The company could reach a deal with the current batch of plaintiffs and set aside money to pay out future claims, or continue fighting case by case to gather more data points.”

The question of whether glyphosate-based herbicides cause cancer remains fiercely disputed. As I reported back in March, a recent research review by several scientists who once served on a US Environmental Protection Agency panel on glyphosate found a “compelling link” to non-Hodgkin’s lymphoma. Last month, the EPA reiterated its long-held view that “there are no risks to public health when glyphosate is used in accordance with its current label and that glyphosate is not a carcinogen.”

Health Canada and the European Food Safety Authority have also concluded that glyphosate is unlikely to cause cancer, and they continue to allow its widespread use. The World Health Organization’s International Agency for Research on Cancer decided in 2015 that glyphosate is “probably carcinogenic to humans.”