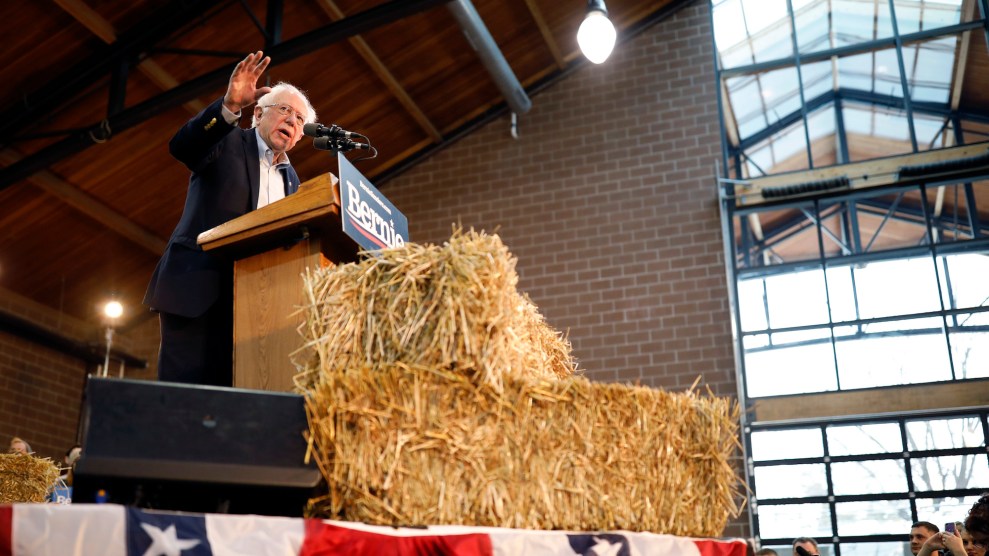 Why do these prominent Democratic presidential candidates think they can appeal to Heartland voters by focusing on corporate consolidation? The 2018 race for Iowa’s fourth Congressional district might hold a clue. Then, first-time Democratic candidate JD Scholten shook the Iowa political scene by nearly defeating Rep. Steve King (R.-Iowa), losing by just 3.4 percentage points. King had cakewalked his previous seven races, winning each by at least 20 points. But when it came time for his reelection, Scholten came within an inch of beating a staunch Donald Trump ally in a state the president had won by nearly 10 points just two years before.

For years, an ever-shrinking number of companies has hoovered up more and more control over our food.

It didn’t hurt that King kept venting white nationalist sentiments in the weeks before the election, causing even some conservatives to rebuke him. But Scholten says he hit upon another recipe for success in a rural district of farm-dominated state: “Talk about market consolidation,” he recently told the Washington Monthly.

That might sound like a wonky pitch. But it gets to the core of one of the main forces eroding rural America—and voters are starting to take note. For years, an ever-shrinking number of companies has hoovered up more and more control over our food. Amazon and Walmart are slowly taking over the regional grocery industry; Heinz and Kraft are now one company. At the base of the food chain, farmers may face the most tightly consolidated set of oligopolies of all: a handful of seed and pesticide companies (like Bayer, which took over Monsanto) that sell them what they need to grow crops, and another few that buy their crops and livestock. Caught between a few input providers and a few buyers, the region’s farmers have been struggling for years.

Another candidate, Sen. Cory Booker (D-N.J) has also talked tough on Big Ag consolidation. Last year, he sponsored legislation that would put a moratorium on all ag mergers, pending a “commission to study ways to strengthen antitrust oversight of the farm and food sectors and recommend improvements to merger enforcement.”

Sanders’ rural package matches Warren’s and Booker’s anti-consolidation fervor and takes it one step further. It includes a remedy that hearkens back to the New Deal era: a proposal to help farmers of big commodity crops like corn and soybeans coordinate planting decisions to avoid chronic overproduction. This policy is known as supply management. He would reestablish a national grain reserve, a lapsed New Deal institution that collected excess crops in bountiful years to keep prices from plunging, and release them in bad years to avoid shortages (a notion that, as Sanders points out, makes lots of sense in an era of climate chaos). No major candidate since Jesse Jackson, who ran during the height of a brutal farm crisis in the 1980s, has proposed supply management, according to Iowa corn and soybean farmer and long-time rural activist George Naylor.

Joe Biden, the current presidential frontrunner, has yet to release an agriculture platform. But it will be surprising if he heads in Sanders’ direction. The Obama-Biden administration flirted with taking on the highly concentrated meat and seed monopolies, but ultimately pulled back. Tom Vilsack, who served as US Department of Agriculture secretary throughout the Obama years and is now CEO of a dairy-industry trade group, pretty much summarized the Obama-Biden era Democratic party’s take on corporate-dominated agriculture on an Iowa podcast last month: He advised Democratic candidates against the very kind of anti-monopoly stances Sanders and Warren are taking, claiming that since these food conglomerates employ a “substantial number of people” in Iowa, “you’re essentially saying to all of those folks, you might be out of a job.”(Side note: Here’s why that’s probably not true.)

There are signs that even the Democrat Party’s mainstream may be turning against its old coziness with the Big Ag giants.

But there are signs that even the Democratic Party’s mainstream may be turning against its old coziness with the Big Ag giants. On Tuesday, the Center for American Progress, a major think-tank with deep ties to the centrist Clinton/Obama wing of the Democratic Party embodied by Biden, released a paper arguing that “growing corporate power has left relatively small farms and ranches vulnerable to exploitation at the hands of the oligopolies with which they do business.”

CAP’s paper calls for antitrust enforcers to “take affirmative steps to break up monopolies,” and proposes a “temporary moratorium on mergers in the agriculture sector” and a revival of the “powerful tools of antitrust enforcement that have been eroded over the past four decades.” That time frame quietly acknowledges the Clinton and Obama administrations’ roles in the problem.

The report brims with facts that illustrate the plight of farmers operating under the shadow of a few seed and pesticide behemoths, which wield massive power over farmers’ expenses—and their incomes. For instance: “Between 1995 and 2011, the cost of purchasing seed to plant one acre of soybeans and corn increased 325 percent and 259 percent, respectively, while yield per acre only increased 18.9 percent and 29.7 percent, respectively.” While farmers made only a small amount more for each acre they cultivated, the cost of planting those acres exploded.

And that was before the most recent spasm of mergers, during which the Big Six seed companies became the Even Bigger Four: Bayer subsumed Monsanto; Dow and DuPont fused their agribusiness units into Corteva Agriscience, Chinese conglomerate ChemChina bought Syngenta; and German chemical giant BASF beefed up its seed/pesticide offerings.

In addition, the CAP paper floats an idea straight from Warren’s playbook. Back in 2007, just as a massive financial meltdown was gaining steam, then-Harvard Law professor Warren penned an influential article calling for the establishment of a federal commission designed to “eliminate the hidden tricks and traps” that banks and other lenders use to ensnare consumers into risky investments. The idea caught on among the Congressional creators of the the Dodd-Frank financial reform law, and in 2011, the Consumer Financial Protection Bureau debuted—and has been under assault by Wall Street-aligned Congressional Republicans and later the Trump administration ever since.

The new CAP paper calls for an Independent Farmer Protection Bureau, “modeled after the Consumer Financial Protection Bureau.” The IFPB would “investigate and stop abuses of market power; protect farmers’ contract rights …; combat anti-competitive practices in seed and other input markets”—and even have the power to “review and block mergers in markets that affect farmers.” And it would give debt-laden poultry and hog farmers, many of whom currently toil under contracts favorable to enormous meat companies who buy their animals, a federal watchdog to protect them from abuses.

“It looks like the Dems are really searching for a platform for rural America,” says Joe Maxwell, a Missouri hog farmer and executive director of the Organization for Competitive Markets, a farmer-led group that organizes against corporate control of agriculture. Maxwell is a savvy former politician in his own right—he’s a former state representative, senator, and lieutenant governor in his home state. When CAP held a press conference Tuesday to roll out its new report, Maxwell appeared on the panel with the authors to field questions about living on the wrong side of corporate power. Also on the stage: JD Scholten.

“We and others have been working hard to get these conversations into the public discourse for years,” Maxwell says. “And now they’re clearly taking on a life of their own.”