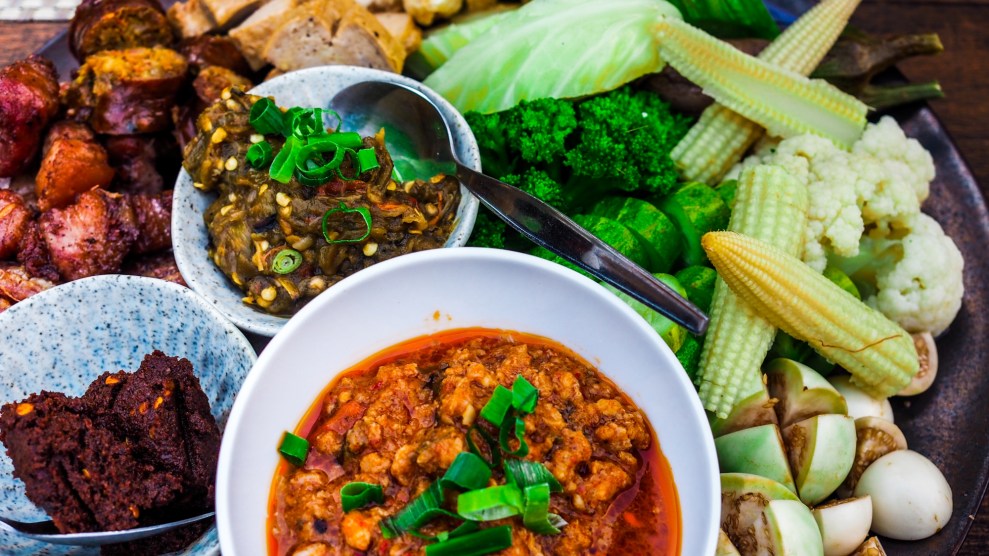 A spread of Northern Thai dishes.DecNui/iStock/Getty

When I moved to the United States from Thailand, one of the first questions people always asked me was: “What’s the most authentic Thai restaurant you’ve found here?” To be fair, I had the same question myself. The first time I ordered a plate of pad thai, I was appalled.

As I traveled around the country, landing in New York and then San Francisco, I searched for restaurants that offered the food I grew up with in Northern Thailand—dishes beyond the usual stir-fries, noodles, and rainbow curries. Whenever I found a place that featured a bowl of khao soi—a rich curry noodle soup topped with preserved cabbage, red onions, and fried noodles—sticky rice, or more than one type of papaya salad on the menu, I’d feel exhilarated. If the wait staff brought out a small rack of condiments with sugar, fish sauce, chili flakes, and vinegar—ingredients you’d find on the tables of most restaurants in Thailand—I’d feel a surge of nostalgia. Those were the restaurants I’d recommend to friends. The food was delicious, but it was the details and preparation that reminded me of home.

Hear educator Sara Kay talk about the use of the word “authentic” in restaurant reviews on Bite:

Still, I’ve always wondered whether “authentic” was the right marker to focus on. The term felt loaded—a characteristic that many restaurants, especially so-called “ethnic” ones, had to proclaim to draw customers. Who is the word “authentic” being marketed to? And who gets to decide what “authentic” actually is?  So I was struck when I read an article in Eater by Sara Kay, a food and nutrition educator in New York, arguing that using the term “authentic” on review apps such as Yelp can support a white supremacist framework.

For her food studies master’s thesis at New York University, Kay analyzed 20,000 Yelp reviews of New York restaurants. For each review, she assigned a score guided by how often authenticity was mentioned. Based on average scores, reviewers talked about authenticity the most when referencing Mexican and Chinese food, Kay discovered, followed by Thai, Japanese, and Indian food. Overall, she noted, reviewers used authenticity more frequently to describe cuisines from recent and low-income immigrant groups.

And often when people reviewed non-European eateries, she found, they associated the term “authentic” with cheaper attributes, like dirt floors and plastic stools, and negative qualities. “Service was what you’d expect in Chinatown,” one review read. When describing cuisines from Europe, the United States, or Japan, authentic was often coupled with positive descriptions of ambiance or decor; for instance, “there are a lot of authentic and classic Japanese touches,” or “the waiters are so good looking and so cute with their French accents!” “Reviews tend to reflect the racism already existing in the world,” writes Kay.

Kay isn’t the first person to point out the double standard that Americans apply to restaurants they consider “ethnic.” Krishnendu Ray, a professor at New York University and author of the book The Ethnic Restaurateur, has argued that the term is often bound up with our own expectations. “If the food is expensive, then it can’t possibly be authentic,” Ray told the Washington Post. And those expectations and unwillingness to pay more for ethnic cuisine, says Ray, “communicates a form of racial or ethnic hierarchy”—one that immigrant chefs are increasingly trying to break away from.

I spoke to Kay over the phone for an episode of the Bite podcast. Our conversation has been edited for length and clarity.

Mother Jones: How did you start your research? Can you explain your methodology a little bit?

Sara Kay: I read 20,000 Yelp reviews. And I chose that number because I wanted to look at restaurants in New York City specifically, because that’s where I live. That’s what I’m familiar with and had the most access to. So I chose the top 10 most popular ethnic cuisines in New York City based on Zagat ratings, plus I added a few that I thought were most prescient to the time, like Middle Eastern food and soul food. I picked the top 20 restaurants in this category, and I read 100 reviews for each restaurant.

MJ: You found that “the average Yelp review connotes authentic with characteristics such as dirt floors, plastic stools and other patrons who are non-white when reviewing non-European restaurants. This happens approximately 85 percent of the time. But when talking about cuisines from Europe, the word authentic instead gets associated with more positive characteristics.” So basically, non-white, non-European cuisines are dirty and cheap. But European cuisines are often seen positively.

“Reviews tend to reflect the racism already existing in the world.”

SK: Yeah, absolutely. It’s really, really wild. People use this authenticity language way more when they talk about restaurants with cuisines from countries with poor immigrants, places like Mexico and China, or immigrants that are poor when they come into the United States. But even within the use of that language, they use it in very different ways when they talk about cuisines with those poor immigrants associated. So they say things much more harshly. They use authenticity as a barometer for success in a way that they do not with French and Italian restaurants. And it was pretty startling to see, especially in those numbers.

MJ: What do you think is the larger impact of how people use the term? Why does it matter?

SK: I think it matters because when we talk about authenticity, we’re really basing our judgments off of our expectations and our experiences of certain cuisines. And my research shows pretty clearly that when we use this word, we’re using it to refer to migrant groups we’re less familiar with, and our expectations and experiences are potentially less founded in what we have actually done or our actual experiences, and more founded in stereotypes or false perceptions. The implications are that we unfairly judge these cuisines and cultures based on false perceptions when we use language like authenticity to describe these cuisines and these cultures and peoples.

KV: You also mentioned that “reviews tend to reflect the racism already existing in the world.”

SK: Absolutely. Yelp is a huge platform, I think they have over 165 million reviews now. And if we extrapolate outwards—and over 85 percent of reviews for Mexican and Chinese restaurants use this language—then it does really reflect the larger perceptions of these cultures in the United States and beyond.

KV: You also talked about how thinking of cuisines in terms of authenticity can make it harder for chefs and owners to break out of stereotypes or increase the price of certain cuisines. But don’t we see a lot of restaurants using that term themselves?

SK: I think it’s a two-way street. I think it’s really hard for chefs and restaurateurs to break out of authenticity molds. It’s really tough because I see this in the Yelp reviews all the time that chefs and cooks have to use words like “authenticity,” and “legitimate” and “traditional” in order to gain an audience and a following. And if they don’t, then people won’t take them seriously, or they won’t have an attachment point to come in eat at their restaurants. But French or Italian, or even sushi restaurants these days don’t have to use these words because we all have a shared perception of what those cuisines or those dishes, and specifically those people mean, in our culture and in our society. And so it’s a double-edged sword.

Restaurateurs are using these words as a marketing strategy. And eaters are using these words to justify eating there as a way to gain authority on a foreign subject or a topic that might be challenging for them, or new, at the very least. We just don’t use those words to talk about French or Italian or American or even German food. We think of them very differently than we do “ethnic” cuisines.

MJ: Your article also got a fair amount of attention and criticism, especially your assertion that using the term “authentic” supports a white supremacist framework. Some commenters have said that you can’t make these claims without knowing the demographics of the people you’re talking about. What’s your response to that?

SK: It sure did get some criticism. So my response to that is: Read the article again. I am not specifically talking about the Yelp reviewers who wrote the comments that I looked at—I’m actually talking about their reviews. Even if the reviewers are not all white—which I assume they are not—even if that is the case, they can still be supporting a dominant social structure and milieu in the US that’s happening right now.

MJ: So how can we be more conscious about food reviews and the language that we use as consumers and restaurant-goers?

SK: Soleil Ho wrote a really excellent article about the words she won’t use in her new role as the restaurant critic in the San Francisco Chronicle. So I would certainly start there if your listeners are interested in learning more about language use and the choices behind word specific words and intentionality around that. But in terms of what we can do as eaters, I think just asking a lot of questions, asking about stories, reading a lot, reading articles from a wide variety of news sources, and even ones outside of your comfort zone. I would also just say to be aware of the expectations, and the experiences that you bring into an experience.

I saw a lot Yelp reviews were reviewers had really high expectations about certain tacos, because they had traveled in Mexico for six months and thought they knew what a perfect taco was. I think that’s great, and I don’t want to invalidate anybody’s travel experience, but I think it’s also important to understand that all of those experiences are valid. And the experiences of the cooks and the servers and the bussers and the waitstaff at the restaurant are valid and will also inform your dining experience, just as much as your travel experience might. Both of those things are legitimate and don’t make your travel experience and the taco you’re eating more or less authentic in comparison.