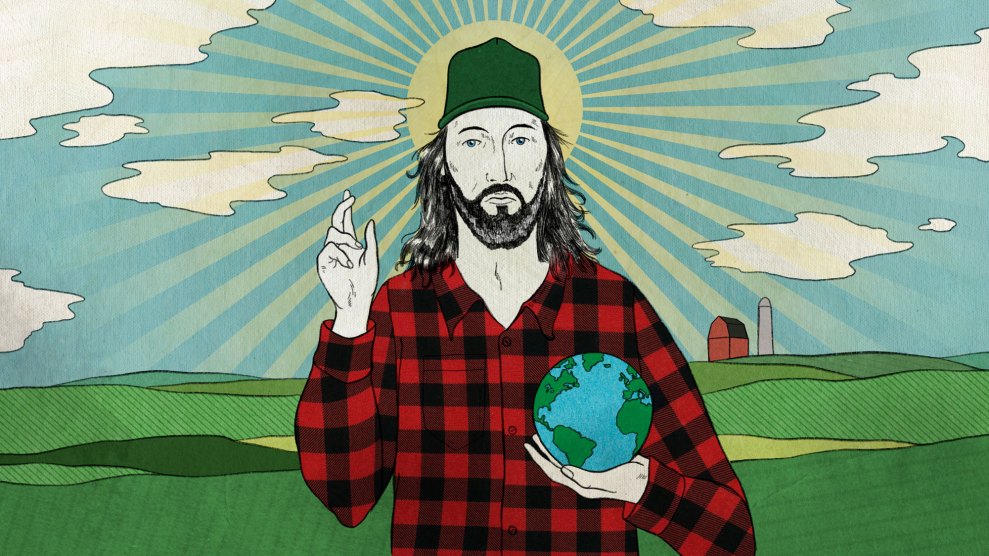 In early March, just a week before the Midwest was inundated by catastrophic flooding, a dozen farmers gathered at the First Presbyterian Church in Grinnell, Iowa, for an event billed as a conversation about “Faith, Farmers, and Climate Action.” “How is God calling you to use your farm to improve the world?” asked the evening’s facilitator, Matt Russell. “We’ve got this narrowing window of time in which we can act,” he said. “When we think about climate action—are you feeling any call to that?”

Russell directs the Iowa branch of Interfaith Power and Light, a nonprofit that promotes a religious response to global warming. A fifth-generation farmer who runs a livestock operation with his husband in nearby Lacona, Iowa, the 48-year-old nearly became a Catholic priest in his twenties but then got a degree in rural sociology. Now he preaches that America’s farmers—a demographic seen as religious and conservative—are a secret weapon in the climate fight.

Russell thinks growers care about global warming in “far bigger numbers than past polling, research, and conventional wisdom recognize.” According to a 2013 survey, 75 percent of Iowa’s farmers believe in climate change, yet only 16 percent think the shift was due to human activity. It’s not known if those opinions have held: When Iowa State University researchers were putting together an updated version of the same poll in 2017, President Donald Trump’s Department of Agriculture told them they could not include a question about climate change. But Russell acknowledges that many farmers are reluctant to champion a progressive talking point.

“When I have a private conversation with a farmer, they are generally not skeptical about human-caused climate change. They just know they can’t talk about it publicly,” he says. He views faith-based workshops as a “safe space” where growers can discuss the issue. As TV crews and pundits descend on Iowa for the 2020 caucus season, Russell’s goal is to round up a 100-strong squad of farmers who are willing to speak publicly about agriculture as a climate solution.

After a group prayer and a hearty meal of chicken sandwiches and coleslaw, the conversation at the church turned to cover crops. All plants, from a redwood tree to a stalk of corn, absorb carbon dioxide and deliver it to the soil. Left undisturbed, some of this carbon remains there for millennia. In the past century, conventional agricultural practices have stripped America’s soils of more than half of their original carbon content.

The alternative approach, which includes growing crops that absorb more carbon and planting without tilling the soil, is sometimes referred to as “carbon farming.” In the United States, where agriculture accounts for about one-tenth of greenhouse gas emissions, these adaptations could, in the best-case scenario, offset all agricultural emissions. One analysis of these techniques found that they can sequester nearly a ton of carbon per 10 acres annually—the equivalent of taking one car off the road for 70 days. Even more carbon could be stored if farmers planted more trees and permanent vegetation. Many growers already embrace these techniques, in part because they enrich the soil. “We’re all in the carbon reduction business,” a large man in suspenders said during the workshop.

Hear more about how climate change is upending America’s farms—and how farmers are fighting back—on the latest episode of Bite:

There are signs that Russell is making headway. Chris Teachout, a corn and soy farmer from Shenandoah, Iowa, told me that within a month of attending an Interfaith Power and Light meeting, he received calls from two pastors asking if he would put on similar events at their churches. Agriculture, he said, offers conservatives a path to “slip in” to the climate conversation. Unlike coal-fired power plants and carbon taxes, dirt is not a partisan issue. Farmers and environmentalists have found common ground in the burgeoning soil health movement. By championing farming practices that could boost fertility, reduce costs, and increase yields (not to mention reduce erosion and water pollution and make crops more resilient during extreme weather), the effort might be a win-win for everyone.

Russell is piggybacking on that movement, but he takes issue with how environmental groups avoid mentioning climate change in front of growers. “They’ll say farmers don’t want to talk about climate change, but they’ll talk about water quality, they’ll talk about organic matter in the soil, even if they won’t talk about sequestration,” he told me. He said the time for semantic games is over. “Moving Republicans to engage with climate action as Republicans, that gets to a huge accelerant of what’s possible.”

A few prominent Iowa conservatives are already getting their hands dirty. When Ray Gaesser, a no-till farmer, ran for Iowa secretary of agriculture last year, he told reporters that he did not believe human activity was responsible for all climate change. But after attending an Interfaith Power and Light meeting earlier this year, he pledged to help Russell. When I met him in his tidy white equipment shed outside Corning, Iowa, he told me he believed it was time for farmers to claim the “leadership mantle” in mitigating climate change, in part because farmers “are also sequestering carbon, but nobody’s giving them credit.”

Farmers “are also sequestering carbon, but nobody’s giving them credit.”

Gaesser lost the primary, but he now serves on President Donald Trump’s agriculture advisory committee, and he counts many of the Department of Agriculture’s senior leaders as friends. At the end of our conversation, he let slip that he was on the way to Des Moines to meet with Secretary of State Mike Pompeo, a notorious climate denier who only recently acknowledged that there is “likely a human component” to global warming.

Fred Yoder, an Ohio farmer who’s also on the president’s agriculture committee and once helmed the National Corn Growers Association, told me that while subsidies and incentives to help farmers sequester carbon are not exactly at the top of the administration’s agenda, the midterm elections may have signaled a turning point: “The administration, now they’re forced to be looking at climate change initiatives because the House has been taken by Democrats,” said Yoder, who chairs the North American Climate Smart Agriculture Alliance. “Quite frankly, I’m just glad that we at least have to talk about it now.”

But the biggest obstacle to taking action may not be partisan politics. “What is missing, in your experience, from getting farmers to be more leaders on engaging with the problem?” Russell asked the crowd at the church. “Financial reward,” blurted out the farmer in suspenders, to nods and grunts of agreement.

Studies have found that converting to no-till farming and cover crops could potentially pay for itself in the long run, but the initial investment is difficult when commodity crop prices hover near the cost of production. The Department of Agriculture offers several incentives for improving soil health, but they have yet to be widely adopted. In February, a consortium of food and agriculture giants, including General Mills and McDonald’s, announced plans to create a private-­sector carbon market dedicated wholly to agriculture by 2022. Russell told the farmers in Grinnell that he was confident a revenue stream for carbon sequestration would soon materialize. “If you put carbon in the atmosphere, you’re going to have to pay. If you can figure out how to pull it out of the atmosphere, you’re going to get paid,” he said.

For Gaesser, the recent floods that submerged large swaths of the Midwest are all the motivation he needs. He’ll plant most of his land with cover crops—both to keep it from washing away and to capture carbon. “We thought we were doing really good,” he said, “until we started getting four inches of rain in an hour.”