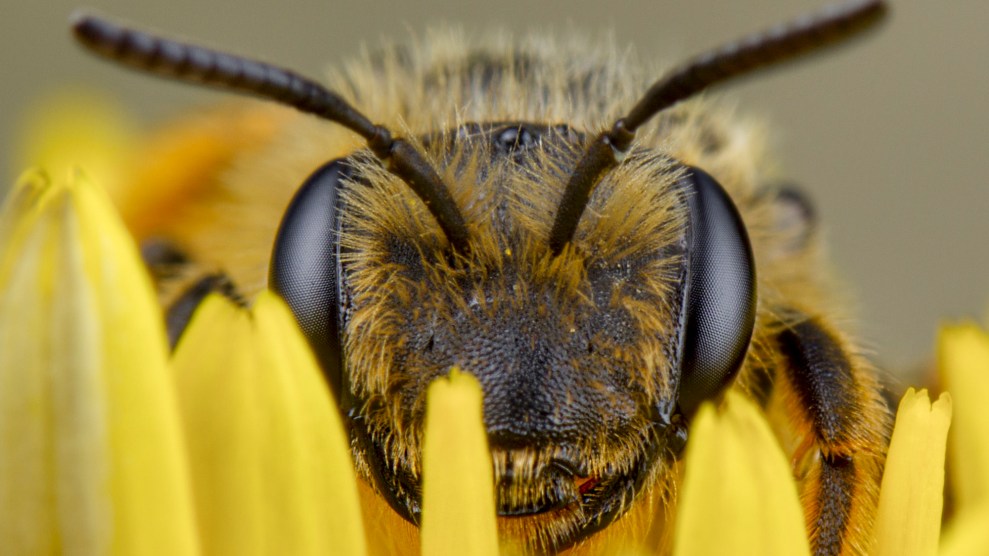 Ever year, farmers in the United States devote at least 80 million acres, a combined landmass three-quarters the size of California, to soybeans. At least half the crop comes from proprietary seeds coated with insecticides and fungicides. These chemicals infuse the plants as they emerge, protecting them from damage by insects and fungal pathogens.

At least, that’s the pitch to farmers: Spend extra for treated seeds, and enjoy higher crop yields in return. But according to a new meta-analysis of past research from nearly two dozen scientists at top public agriculture-research universities—the bargain isn’t paying off.

And while economic gains for farmers are vanishingly tiny, at best, the potential ecological risks are high, the authors note. The insecticides in the treatments are called neonicotinoids, which have been banned in Europe for their potential harmful effects on pollinators. A “growing body of research” suggests these chemicals have a “host of negative effects” on beneficial organisms, the paper notes, including honey bees, wild bees, monarch butterflies, birds, and terrestrial and aquatic invertebrates. On Thursday, Science published a paper from Canadian researchers finding that low-level neonic exposure may delay the migrations of songbirds and harm their chances of mating.

For the soybean paper, the team gathered gathered an enormous amount of data: 194 soybean field studies, across 14 states, conducted between 2006 and 2017. Most of the studies took place in one of the globe’s epicenters of soybean production, the Midwestern “corn belt” states clustered around Illinois, where growers tend to plant soybeans in rotation with corn. The researchers gathered crop yield data for three kinds of soybean seeds: those treated with fungicides; those treated with fungicides and neonicotinoids; and untreated seeds as a control. (According to Christian Krupke, an entomologist at Purdue University and one of the paper’s co-authors, the study didn’t look at neonic-only treatments because they’re not widely available on the market—the seed companies tend to offer neonics bundled with fungicides.)

“The takeaway is that the vast majority of soybean growers in the vast majority of years will not realize a benefit,” Purdue’s Krupke said. One reason for this is that soybeans attract few crop-chomping insects. The bug they do reliably attract, the soybean aphid, doesn’t arrive until the middle of the growing season, by which time the neonics that once coated the seeds have largely lost their effectiveness.

As the paper points out, in the decade before neonics burst onto the scene in the early 2000s, insecticides were used on just around 5 percent of US soybean acres. These days, the best-documented estimate is that half of our soybean acres are grown from seeds treated with neonic-fungicide package, and “we know anecdotally that number is considerably higher than that,” Krupke said.

The results of the paper suggest that soybean farmers are paying up for seed treatments that add little to their bottom lines but subject tens of millions of acres of the American landscape to unnecessary pesticides.

Bayer Cropscience and Sygenta, the two companies that dominate the neonic market and are also enormous sellers of treated corn and soybean seeds, pushed back on the new meta-analysis. A Bayer spokeswoman emailed me this statement:

The benefits of neonicotinoid seed treatments are well established, which is why thousands of farmers choose to use them every season—based, like all crop-protection products, on the needs and challenges of their individual fields. We have several questions and concerns about this study, including how it corresponds to current agronomic practices. One major point we keep coming back to is this: The entomologists and agronomists who published this paper might not think a 2 bu/acre yield increase is a big deal, but clearly growers do. And we do, too.

A Syngenta spokeswoman pointed to a 2017 study commissioned by Syngenta, Bayer CropScience, and Valent USA finding that “neonic seed treatments in the US increased crop yields in soybeans by an average of 3.6 percent, when compared to untreated controls.” She added: “Neonics provide a unique mode of action, necessary to managing pests resistant to other insecticides—key to soybean production.”

“You can’t get neonic-free corn.”

As for corn, soybean’s companion crop, Krupke says nearly all of it comes from neonic-coated seeds, and has since the mid-2000s. Since there’s essentially no neonic-free corn grown, it would be “virtually impossible” to do a large, region-wide study assessing whether the insecticide increases crop yield enough to justify farmers’ expenditures. For a 2017 paper, Krupke was part of a team that compared corn from treated and untreated seeds on test plots at three sites in Indiana. They found no yield benefit from the treatments. He told me he’d like to recreate that experiment on a larger scale and in other parts of the Midwest. “But you can’t get the neonic-free corn—it’s not available for purchase.”

Meanwhile, on Thursday, a group of beekeepers and the environmental law outfit Earthjustice sued the Environmental Protection Agency to cancel its controversial decision to expand uses of a neonic called sulfoxaflor. In 2016, under pressure from a lawsuit by environmental groups and a federal court order, the agency had severely limited use of the insecticide to a few crops. The Trump EPA removed those protections in July, expanding sulfoxaflor’s approved uses to soybeans, corn, and other crops. “Honeybees and other pollinators are dying in droves because of insecticides like sulfoxaflor, yet the Trump administration removes restrictions just to please the chemical industry,” Earthjustice attorney Greg Loarie said in a press release. “This is illegal and an affront to our food system, economy, and environment.”