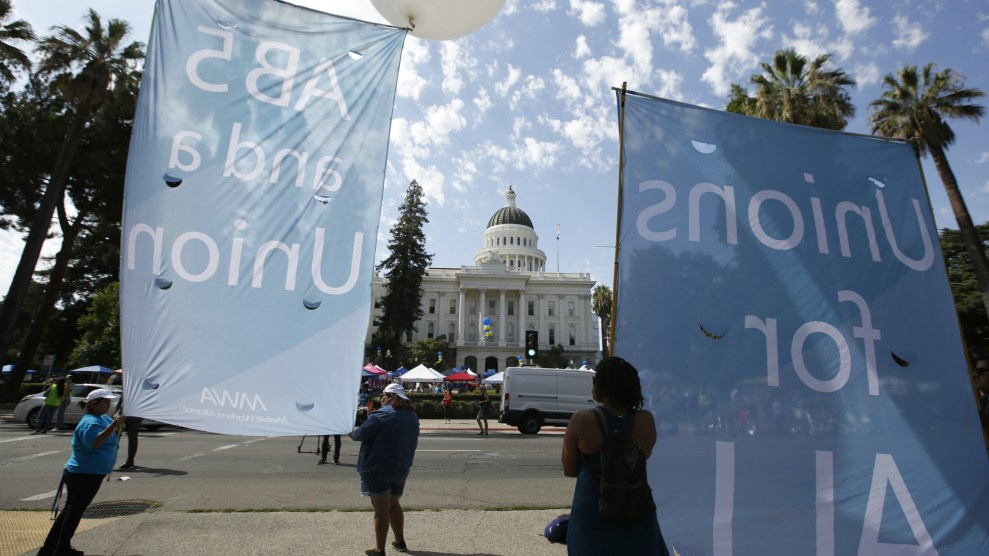 Supporters rally in August for California's Assembly Bill 5, which will take effect next year and limit when corporations can label workers as independent contractors. Rich Pedroncelli / AP

Instacart is a grocery-shopping service valued at nearly $8 billion that doesn’t pay the people who buy and deliver the groceries enough to live, those workers say. It is also, like many other technology companies built on the back of an underpaid workforce, a “platform.” How these things—the valuation, the low wages, the self-designation as a platform—are all related has everything to do with why thousands of Instacart shoppers walked out of the job earlier this month.

Narrowly speaking, workers were striking over tips. Instacart’s payment structure is confusing and opaque. Shoppers get a base rate of $7 to $10 for every “batch” of deliveries, which can comprise up to three orders; payment above the base is algorithmically determined. But tipping is straightforward, at least in theory. Shoppers are supposed to get 100 percent of their tips (though they’ve accused Instacart of pocketing a share, a charge the company denies). Previously the app defaulted to a 10 percent tip. At the moment it’s at 5 percent, and shoppers want the old rate restored.

On October 9, one worker, Vanessa Bain, wrote an open letter explaining why shoppers were planning to strike, laying out the company’s history of mistreating workers. In response, strikers claim, Instacart cut wages by ending a quality bonus that gave shoppers $3 each time they received a 5-star rating. A public outcry followed.

Instacart not only didn’t honor the workers strike demands, but they retaliated and cut pay further!

They cut bonuses which can be up to 40% of the workers’ income.

The workers are contractors so they aren’t as protected from this retaliation.

The strike, which lasted three days, was about a lot more than tips. The larger issue, Bain said, is that Instacart is doing the classic tech-company move of pretending its employees aren’t actual employees.

“Instacart classifies as independent contractors. But Instacart also employs people to do very similar work to what we do,” Bain explained to Mother Jones. “The only point of difference between us is that we do the delivery aspect of the orders as well. And we use our own cars.” Instacart is the only gig company she knows of with two different classifications for seemingly the same job—an “obvious hypocrisy,” Bain said.

In the fine print of its contracts Instacart justifies its dual classification using a very special, very Silicon Valley word: “platform.” To become a Shopper is to “join the Instacart platform!” they say in hiring materials. Instacart is, according to their contracts, a “communications and logistics platform.” “In-store shoppers” (who do the shopping but don’t drive the groceries) are part-time employees, while “full-service shoppers” (who do the shopping but have to deliver them with their own car) are independent contractors participating in the platform.

In Silicon Valley, any business is not the business it conducts but the means used to conduct it. Twitter, Facebook, and Instagram are platforms, too (which means they don’t have to police content the same way a publisher does). Uber is a platform, and so is Lyft (which means they can skimp on wages and benefits). Platforms aren’t responsible for anything beyond providing the infrastructure for connecting people. Platforms exist in a state of sublime innocence.

“With Instacart, Uber, Lyft, Doordash—the whole gang—they are very clearly trying to distance themselves from the idea that they’re employers,” Bain told Mother Jones. “Their argument is that they’re a marketplace. They’re a software company. They’re just connecting—that’s just not true.” Bain pointed out that Instacart tells shoppers how to do their jobs and sets rates. Most importantly, Bain said, “without shoppers you don’t have an Instacart.” They are employees by any definition but Silicon Valley’s. “It’s comical almost,” she said. “If it weren’t so offensive and absurd.”

In 2015, Instacart brought some of their shoppers on fulltime amid fears of a backlash against Uber’s system of employment-in-all-but-name. Instacart played the move as a way of giving the company the option to train shoppers as employees, but CEO Apoorva Mehta, a former Amazon employee who founded Instacart in 2012, admitted to Recode that “we are in this awkward phase where we have millions of people working in this new economy, and the laws are not clearly defined.” Hiring some shoppers as full-time employees seemed like a concession that the company was more than just a platform.

In 2016, shoppers hit Instacart with a class-action lawsuit over their independent contractor status. In the company’s independent contractor agreements from that time, Instacart defined itself as a “technology company that offers a proprietary communications and logistics platform.” The suit accused Instacart of using “these tech-heavy buzzwords to brand itself as something other than what it really is—a grocery delivery service subject to the same employment laws as any other employer.” The case was settled in 2016 for $4.6 million—“a drop in the bucket,” Recode wrote. (Instacart drivers also recently sued the company Illinois over their independent-contractor status.)

All of Instacart’s wrestling with the metaphysics of its very existence coincided with a fight with shoppers over pay structure. In 2016, Instacart went from an automatic 10 percent tip to a “service fee” that would go directly to the company. After pushback, including a threat of a strike, Instacart stood down. By 2017, it switched to an algorithmic pay model that gave shoppers as little as $1 per commission, according to strikers.

During a discussion with TechCrunch in 2016, CEO Apoorva Mehta said the low wages were simply part of the model of growth. He snapped his fingers to explain the company’s quick expansion. “We grew,” Mehta explained, when asked about his workers’ wage concerns, “very, very fast.” He had his tech-lord patter working that day, prefacing answer after answer by saying things like “The problem we’re trying to solve is very hard” and “Let’s just make this real.” The core of the problem, as he saw it, was finding a way for as many Americans as possible to have groceries delivered to their homes in under an hour, no matter the cost. “Let’s make it real,” he said. “As a result of that [growth], tens of thousands of people have an ability to earn a wage…When you grow so fast, obviously you’re going to have adjustments that you’re going to have to make.”

“It doesn’t take anybody with an advanced degree to see if you don’t have pay workers to the same standards, you’re going to have more potential for profit,” Bain said. “It’s built into their appeal for investors. They’re relying on a model of labor that people have fought very hard to meaningfully reform…and they’re just subverting it.” (Instacart, according to the Washington Post, is taking steps to go public.)

“Every year we push back as our pay spirals further down the drain, and Instacart’s valuation swells by the billions, and your net worth skyrockets. When will enough be enough?” asked the strikers’ letter sent earlier this month. In September, protesters demanding a $15 minimum wage began their tour of Silicon Valley by stopping outside Instacart’s headquarters. In a statement to local radio station KQED, Instacart said it would seek “to modernize laws in a way that allows [workers] to reach their personal and financial goals, while maintaining the flexibility they enjoy as part of the Instacart platform.”

If anyone is enjoying the “flexibility,” it’s Instacart. After the strike and the public outcry, Vice’s Motherboard, whose work on Instacart has been indispensable, reported having “received nearly 50 messages from Instacart workers across the country voicing outrage about recent pay cuts. Many of them have the overall sense that what was a good paying gig just two years ago has devolved into a subsistence wage job as the company has tinkered with the algorithm that determines pay and flooded markets with new workers, driving down wages.” Oh and the laws have modernized—AB5 passed, barring misidentification of independent contractors.

The law goes into effect in 2020. There is still an open question of how it will be enforced, to say nothing of how to stop the routine retrenchment in the gig economy. “Next year is going to be very pivotal,” Bain points out. The problem? Gig companies are putting $90 million into a ballot measure to provide exemptions for AB5.