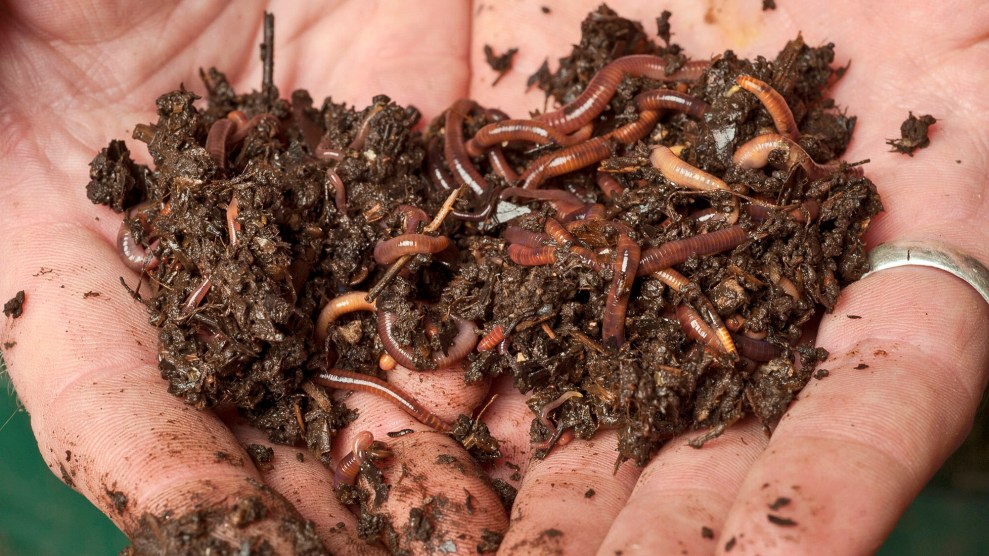 Everyone will think your worm collection is gross until they need some soil for their plants.

That’s what I discovered when I told my coworkers that I keep a plastic bin full of squirming invertebrates in my apartment to decompose food scraps and generate compost. In the summer of 2018, while reporting for a local newspaper on organics collection in New York, I became fascinated with the process by which food waste biodegrades and how waste disposal impacts the environment. So I went online and ordered 500 red wigglers whose descendants are still thriving in a decaying pile of my discarded food.

Sound gross? That’s what my colleagues said. But as winter set in and everyone’s house plants began to wilt, my coworkers started asking me to bring them bags of the nutrient-rich soil my worms produce. I had more than enough dirt to go around. After all, you reap what you compost.

Instead of letting your holiday leftovers fester in your refrigerator, consider giving them a second life with an indoor compost bin. Here’s how to get started.

Take a tour of Abigail’s apartment garden, which uses her compost, on this episode of Bite:

No. A healthy compost pile will have an earthy, even pleasant, smell.

What will prevent the worms from escaping?

Worms thrive in dirt and will dry out if they leave the bin, so there’s very little risk of them escaping. I did have one minor worm exodus early in my composting career when my bin’s carbon-nitrogen balance was off. Still, worms move slowly and can’t get very far. The odds of one popping up beside your pillow while you sleep are next to zero.

OK, but why should I bother?

One worm bin in a closet isn’t going to stop climate change when fossil fuel companies are responsible for 70 percent of greenhouse gas emissions. But it can’t hurt. Composting keeps food out of landfills, where anaerobic bacteria decompose the waste and produce methane, a greenhouse gas more potent over the short term than carbon dioxide.

Composting is also a fun science experiment involving hundreds of the lowest-maintenance pets you could have. It will let you feel like you’re nurturing something without the effort of, say, scooping dog poop up off the sidewalk. Plus, when the global economy collapses and we’re forced to live off the fat of the eroded topsoil, you’ll know how to create arable dirt.

You’ve convinced me. How do I get started?

First, you’ll need someplace to put your worms. You could buy a compost bin, or you could use your own container. I opted for a $6 Sterilite storage bin from the dollar store. I drilled a constellation of tiny holes in the top for air and in the bottom for drainage. The EPA recommends drilling a larger, one-inch hole into the container and covering it up with a screen. Then, I set the bin on a bed of newspaper to sop up any water that might seep out the bottom.

I keep my bin in a closet beneath the ladder that leads to my roof, but it’s also common to keep a compost bin beneath a kitchen sink or next to the household trash and recycling bins.

Next, you’ll need to get your hands on some worms. I ordered 500 red composting worms from Uncle Jim’s Worm Farm, whose website is also full of helpful information for getting started composting. European night-crawlers are another option. Just make sure that your worms are safe for composting and not an invasive species.

Once you have your worms and your bin, line the bottom of the bin with shredded paper or ripped-up newspaper. Place the worms in the bin, along with a decent amount of potting soil. Discarded soil from a dead houseplant will do the trick. Add enough water to dampen the soil; it should be about as moist as a wrung-out sponge.

I’m ready to start feeding my worms. What’s this carbon-nitrogen balance you mentioned?

A healthy bin will have a mixture of nitrogen-rich “green” waste and carbon-rich “brown” waste. Nitrogen-rich materials include vegetable scraps and grass cuttings, while carbon-rich materials include newspaper and leaves. If there’s too much carbon in the bin, decomposition will slow down; if there’s too much nitrogen, the bin will emit smelly ammonia. An ideal carbon:nitrogen ratio is about 25-30:1.

It doesn’t have to be as complicated as it sounds. I maintain a healthy C:N ratio in my bin by limiting the amount of food scraps I deposit—worms don’t consume as fast as you’d think!—and adding strips of wet, carbon-rich newspaper each time I add other materials. This is a helpful chart for deciding what to compost and how it contributes to your bin’s C:N ratio.

What can I compost?

Almost any organic matter. Cut food scraps into little pieces, the smaller the better. Avoid meat and dairy, which are harder to decompose and could stink up the bin. Here are some ideas.

When you add materials to your bin, use a trowel to bury them about an inch under the soil so they don’t begin to grow mold and fungi.

How often should I add to the bin?

Not often. I add food scraps to my bin every two or three weeks, but I sometimes abandon it for even longer. Use a trowel to take a peek at how things are decomposing. When your food waste looks sufficiently digested, go ahead and add some more.

It’s a good idea to keep food scraps in your freezer so they don’t start to rot before it’s their turn to be composted. I keep mine in old yogurt containers.

Every once in a while, use a trowel or a shovel to turn the compost and aerate the bin. This will keep your worms happy and the aerobic decomposition churning.

How do I harvest the compost?

The least labor-intensive method is to add new materials to one side of the bin, wait a few days for the worms to migrate to the new food, and then scoop the worm-free compost from the other side of the bin. Check out some other methods here.