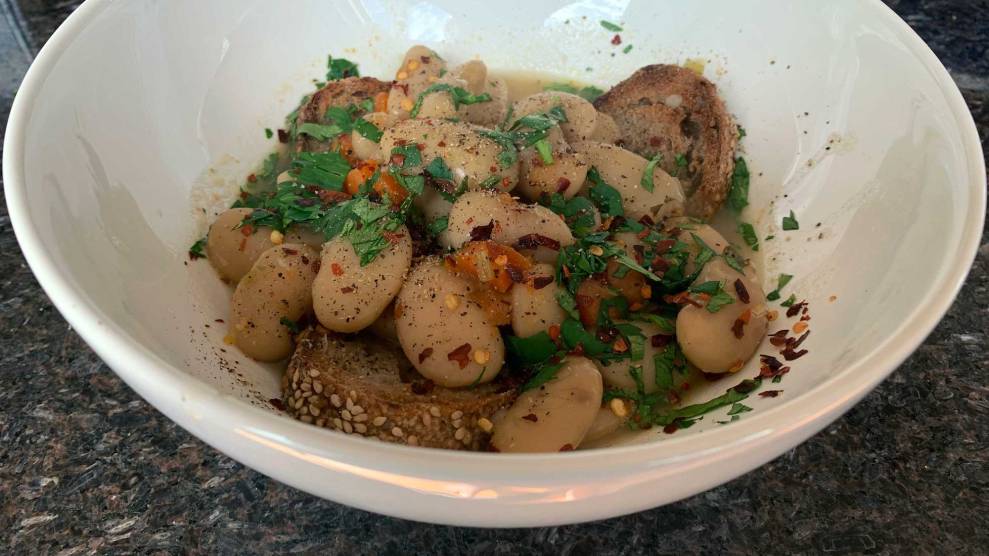 Steve Sando’s stock-in-trade is heirloom beans: old varieties whose seeds have been passed down by small-scale farmers and gardeners over generations, prized for their flavor but ignored by modern industrial agriculture. His business, Rancho Gordo, grew steadily for 15 years, creating a niche among chefs and foodies. In 2019, Sando and his magic beans had a cultural moment: a glowing New Yorker profile and a leap in sales.

Many people feel like events have careened out of control. One way to feel more secure is to “buy way too many beans.”

None of that prepared him for the coronavirus pandemic—and the emergence of heirloom beans as an item to be hoarded, like hand sanitizer and toilet paper. After one of President Donald Trump’s unsteady national addresses, Sando reports, sales “spiked.”

You would not believe the response we've been having. And I wish I were kidding but about 10 minutes after the Trump speech, sales spiked again. It's nuts.

These days, orders are piling in much faster than Sando and his crew can keep up with. The Rancho Gordo website now warns: “If you order today, you can expect us to ship your order on or around 4/15.”  On the new episode of Bite, I caught up with Sando on what it’s like to see his once-niche product become wildly popular during a severe global health and economic crisis.

Rancho Gordo supplies seeds to and buys the resulting beans from a set of farmers in California, Mexico, and (for one particular bean) Poland; when supplies run out, they’re gone until the next growing season. If the current order tsunami continues, he said, supplies of many items will run out until the 2020 crop can be harvested and processed.

Sando’s theory about shoppers’ recent behavior is that amid the chaos of the pandemic, many people feel like events have careened out of control. One way to feel more secure is to “buy way too many beans.”

What’s the best thing to do with these beans? Sando is a minimalist. He favors simple preparations that “let the beans do the talking”—slow simmering with “just onion, garlic, and maybe a spoonful of olive oil.” He suggests cooking a big batch once weekly, and then diverting the resulting beans into a variety of dishes: salad, soup, pasta, etc. (He credits his devotion to batch cooking to a 2017 piece of mine, and to the book An Everlasting Meal—by our other guest on this week’s Bite episode, Tamar Adler.)

I asked him which bean variety was flying off the shelf fastest during the crisis. “Oddly enough, it’s the Royal Corona,” he said, a white bean so “big and fat” that “it’s almost funny.” Corona beer sales may be going down, he noted, “but maybe bean shoppers are smarter?”

I left our conversation disappointed that I had no Rancho Gordo beans in my larder, figuring it would be a while before any were available. Later that day, at the excellent Winston-Salem, NC, wine shop Caviste, I spied a surprisingly well-stocked rack of Rancho Gordo beans. I picked up a couple of one-pound packs—not wanting to succumb to the hoarding instinct—including one bag of Royal Coronas, which are indeed a very large bean.

Corona beer sales may be going down, he noted, “but maybe bean shoppers are smarter?”

In recent years, I have turned to the electric pressure cooker known as the Instant Pot to speed up my bean cookery. Sando opposes pressure cooking as a bean technique; he thinks beans deliver more flavor and better texture when they’re simmered until tender after an initial boil. Soaking, he says, is unnecessary and may sap flavor from the beans, and should be done only of you really want to reduce cooking time.

To cook the Royal Coronas, I decided to follow the directions on the bag precisely. I diced onion, carrots, and celery, and crushed two cloves of garlic. I added it all to a pot along with a pound of the beans and a glug of olive oil, and covered it with water by two inches. I brought it to a furious boil for 10 minutes, uncovered; and then let it simmer, covered, stirring occasionally. After three hours, the beans were tender. I added a blast of salt and pepper, and let them cook a few minutes more.

You don’t need special beans for this method to work; it also does a great job with grocery store black beans, white beans, chickpeas, etc. The cooking time might be longer than three hours, because the longer beans are stored, the longer they take to cook. This wait-and-see slow method fits perfectly into the rhythm of a work-at-home day.

And these Royal Coronas? They had a deeply savory, satisfying flavor, comparable in that way to meat; and the cooking water was as full-bodied and flavorful as a chicken stock. For the first meal I drew from this delectable pot, I dropped a piece of toast into a bowl, and smothered it in hot beans and broth, topping it with chopped parsley, another lashing of olive oil, and a squeeze of lemon. It was sublime—as was the knowledge that I had the remaining Royal Coronas in the fridge, ready to be transformed into more delicious meals during this time of unfathomable chaos.