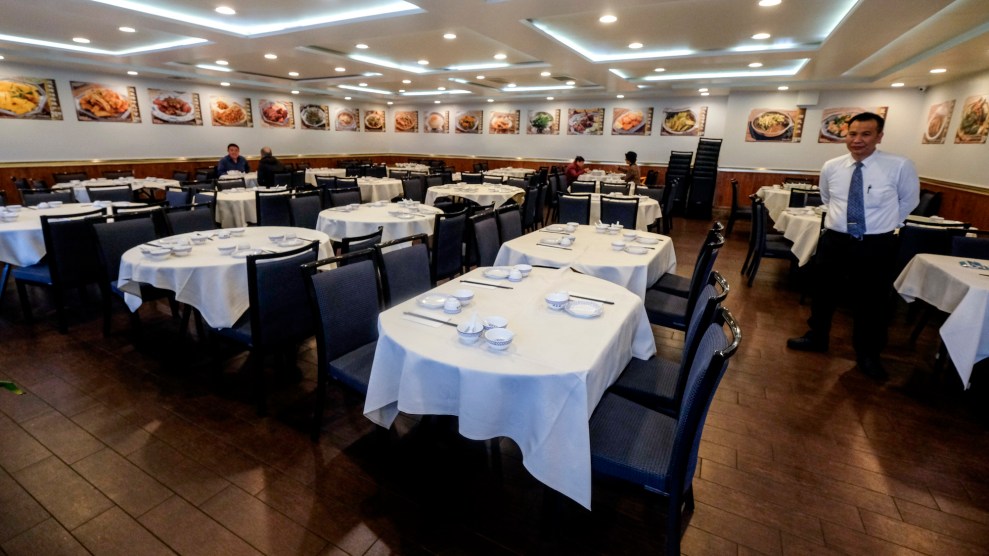 Amid the chaos of the COVID-19 pandemic, restaurants are already taking a massive hit. In Seattle, an early hotspot for the spread of the infection in the United States, the prominent Tom Douglas Seattle Kitchen group announced it would temporarily close 12 of its 13 restaurants starting March 15, citing an up to 90 percent drop in sales. The group hopes to reopen them in eight to 12 weeks.

“It’s all starting to tumble here in Chicago, and no one knows where it will land,” restaurateur Rick Bayless said.

In a March 11 notice emailed to client restaurants obtained by Mother Jones, the online-reservation company Resy revealed data on the Seattle market: “Beginning on Monday, March 2 we began to see a dramatic drop in reservations,” the report states. “Friday night reservations were down 33 percent from the previous week. Monday and Tuesday of this week we saw a 55-65 percent drop in covers across the city.” (A “cover,” in restaurant-speak, is a meal-eating customer.)

Like the virus, restaurant trouble is fanning out nationwide. In New York City, another early COVID-19 hotspot, covers were down 30 percent on March 10 compared to the same date the previous year, and reservation cancellations were surging, the Resy report states.

Enrique Diaz, who waits tables at a popular restaurant in downtown Manhattan, has observed a rapid shift in the city’s dining scene. When I checked in with him on Tuesday, he reported that the previous weekend, the restaurant had been as packed as usual. On Thursday, he texted me a picture of an empty dining room at noon, noting that the restaurant normally serves “at least” 100 diners during lunchtime.

“It’s all starting to tumble here in Chicago, and no one knows where it will land,” Rick Bayless, who runs a operates the Frontera group of restaurants in Chicago, said. The biggest drops in business so far have been to the group’s restaurants dependent on travel: three locations of Tortas Fronteras in O’Hare Airport, and the white-tablecloth restaurant Topolobampo, which, Bayless said, relies on a steady flow of foreign travelers.

And the trouble is just beginning. “We are such a convention city—most of which seem to have been canceled,” he said. “We will certainly have a difficult year.” As restaurants slow, workers’ shifts are inevitably cut, putting serious pressure on a precarious labor force that depends heavily on clocking hours. “Cooks and servers are really hurting,” Bayless said.

The Resy notice goes on to warn that restaurants nationwide should “anticipate very significant cover and revenue declines in April and May.” And it advises that they “consider aggressive over-booking to combat the anticipated spike in cancellations and decline in walk-ins,” and “consider curtailing costs in other ways, such as scaling back menus to the most popular items.”

In Durham, N.C., Tina Prevatte Levy of Firsthand Foods says things are tough in her region’s restaurant scene. Firsthand supplies pasture-raised meat from local farmers to restaurants, grocery stores, and institutional cafeterias. The owners of several restaurants she supplies have told her they’re already having to cut employee shifts because business has slowed. One asked if Firsthand would be willing to donate food to workers who see pay cuts. “He was basically saying, I know people are going to suffer for this—can you partner and help me keep [workers] fed?”

One of her larger customers, a restaurant near Duke University, has seen its business plunge since the university shut down its campus and canceled all events, some of which the restaurant provides catering for. The restaurant’s owner told Prevatte Levy he’d have to slash his Farmhand purchases to summer levels, when business slows dramatically because Duke students are normally gone “and these private events aren’t happening,” she said.

As a result of reduced restaurant sales, Farmhand has already had to slightly pare down the number of beef cows it buys from local farmers, she said—meaning the economic pain cascades from restaurants to suppliers to farmers. Prevatte Levy said she and her business partner are considering a plan to avoid such tough decisions by selling “meat bundles” directly to consumers—creating a new market for meat that would have gone to restaurants—and donating a portion of the proceeds to support underemployed service workers. “I’m pretty worried,” she said. The crisis “just drives home how fragile people’s economic situations are.”

In Seattle, food businesses are already experimenting with new business models to weather the storm and rally around workers.  The legendary fine-dining establishment Canlis announced Thursday it would shut down its dining room and, starting next week, roll out a “bagel shed,” a drive-through burger joint, and a meal delivery service. “Fine dining is not what Seattle needs right now,” the restaurant’s web site states. “Instead, this is one idea for safely creating jobs for our employees while serving as much of our city as we can.”

Elsewhere, restaurant workers and operators are stunned by the fast-changing nature of COVID-19’s impact and trying to figure out what’s next. “I usually work 5 days, this week I only have 4 shifts,” Diaz, the Manhattan waiter, texted me on Thursday. The downturn “hasn’t affected me just yet—but it will definitely affect my next check.”