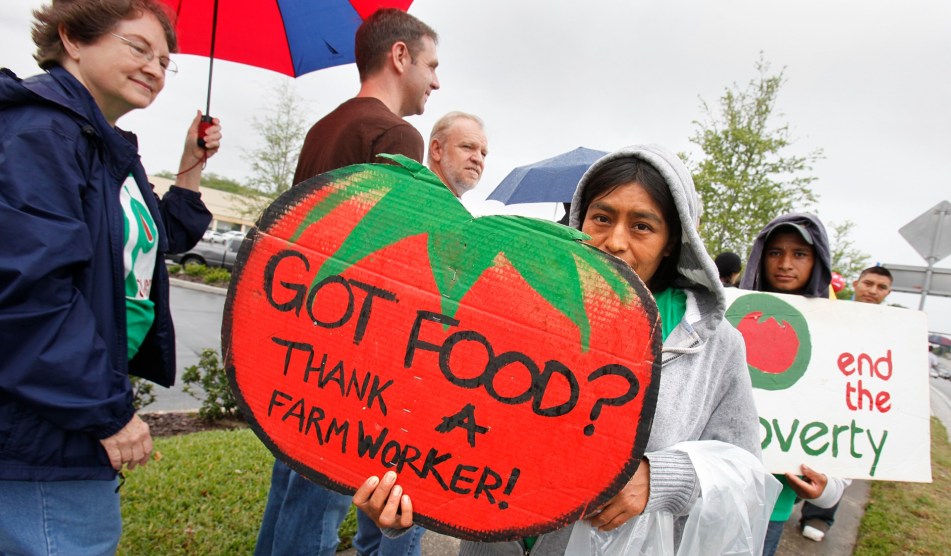 Protestors hold up signs at a march in support of the Coalition of Immokalee Workers in 2010.The Ledger, Ernst Peters/AP Photo

In Immokalee, an agricultural hub in southwest Florida known as America’s “tomato capital,” thousands of farmworkers are busy during the peak of harvest season; many of the fresh tomatoes now in grocery stores—or being delivered to doorsteps—have passed through their hands.

But despite a growing outcry from workers and their advocates, little is being done, by growers or government, to help protect this community of mostly Latino immigrants from infection with the novel coronavirus, even though the country depends on their labor to keep people fed.

According to state health officials, between five and nine cases of COVID-19, the disease caused by the virus, have been reported in Immokalee. But even if that number can be trusted, given the lack of testing, it is almost certain to rise in the coming days and weeks. Immokalee is like “dry kindling,” says Nely Rodriguez, a former farmworker who is now an organizer for the Coalition of Immokalee Workers, a human rights organization.

“The virus will burn through [Immokalee] at an impressive rate, and there would be no way to stop it given the way people in this rural area live and work,” she said in Spanish.

Nearly half of Immokalee’s 26,000 residents live in poverty. Rodriguez says workers often live in old trailers and sleep three or four to a room to save on rent. To get to the fields each day, as many as 40 workers pile into old school buses, provided by their employers. The opportunities for infection are numerous and the lack of resources make this community ill-prepared for a public-health emergency.

On April 3, the community spoke up. Greg Asbed, a founder of the Immokalee Coalition, published an op-ed in the New York Times in which he was blunt about what this lack of protection will mean: “[I]f something isn’t done—now—to address their unique vulnerability, the men and women who plant, cultivate and harvest our food will face a decimating wave of contagion and misery in a matter of weeks, if not days,” he wrote.

That same day, the coalition sent a petition to Florida Governor Ron DeSantis urging him to provide farmworkers with gloves and face masks, economic assistance for sick workers, free virus testing and a field hospital—there is not a single hospital bed in Immokalee and the closest facility is 40 minutes away. Many residents do not own cars.

As this article went to press, no one from the governor’s office had responded to the coalition’s demands, nor did anyone there respond to FERN’s requests for comment. According to the coalition, the Florida Department of Health issued a statement in response to a local TV reporter’s question about the workers’ petition that read: “The Florida Department of Health continues to provide their services and COVID-19 testing in Immokalee. The Healthcare Network of Southwest Florida continues to provide medical care and COVID-19 testing in Immokalee. A field hospital concept has been evaluated and determined unnecessary at this time due to apparent capacity at local hospitals.

“[I]f something isn’t done—now—to address their unique vulnerability, the men and women who plant, cultivate and harvest our food will face a decimating wave of contagion and misery in a matter of weeks, if not days,”

The workers in Immokalee are hardly alone in their predicament. There are some 2.4 million farmworkers in the US, most of whom are undocumented. Another 200,000 or so come seasonally on an H-2A guest worker visa. In mid-March, this increasingly popular labor program was momentarily paused when US embassies closed and suspended all visa processing out of concerns over the virus. Farmers complained about the major disruption this would have on their operations and thus the US food supply. The visa process was allowed to proceed without the mandatory in-person interviews designed to screen out instances of labor trafficking and determine if an individual legally qualifies for the visa.

As FERN reported last month, the precautions recommended by the Centers for Disease Control and Prevention are virtually impossible to carry out on many farms. Fields and orchards provide plenty of space for social distancing, but labor camps and transportation tend to be unsanitary and crowded. Depending on the size of the farm, a single housing unit can hold 200 workers or more.

There are no federal guidelines governing what a farmer should do if they don’t have space to quarantine sick workers or how those who may have the virus can access affordable health care services. Like firefighters and police officers, farmworkers have been deemed “critical infrastructure workers,” meaning they will stay on the job even as the pandemic grows. But despite their essential status, many of their employers, as well as state and federal agencies, have so far failed to address their heightened risk. Though the nearly $3-trillion federal stimulus package passed last month included almost $10 billion for the agriculture sector, it is unclear that any of that will be spent on keeping farmworkers safe.

The United Farm Workers (UFW), the nation’s largest farmworker union, emailed the nation’s major growers twice in the last month, urging them to work with the union and other farmworker groups to protect workers. Neither message got a reply.

In recent weeks, some states have begun to take small steps toward addressing the farmworker issue. In California, home to more than 800,000 farmworkers, the state has issued guidelines asking growers to encourage sick workers to stay home and suggesting they limit the size of work crews to promote social distancing.

The UFW’s Armando Elenes said that without the ability to enforce the guidelines or levy penalties, the California recommendations have “no real teeth.”

A poll conducted last week by UFW found that roughly half of farmworkers surveyed still had not received any information from employers about the virus.

Washington State has also published general workplace guidelines for coronavirus—guidelines specific to farmworkers are expected next week—but advocates there also point to the lack of enforcement mechanisms.

Last Thursday, California lawmakers, Robert Rivas and Eduardo Garcia introduced five bills that would grant farmworkers two weeks of paid sick leave and expedite temporary housing to alleviate overcrowding and allow for social distancing. Elenes says the bills are promising, though it’s unclear when the state legislature will be back in session to consider the package.

“It’s a little bit disheartening,” said Elenes.” I think we’re sitting on a ticking time bomb in the fields.”

A poll conducted last week by UFW found that roughly half of farmworkers surveyed still had not received any information from employers about the virus. Less than a third said they had received information but that their employers were not taking any of the recommended precautions.

Advocates across the country agree that the best preventative measure would be to grant farmworkers comprehensive paid sick leave, a benefit afforded to only a fraction of the county’s farmworkers, and mostly only to those with union protection.

The virus has already reached workers in facilities that package produce, including a packing house for dates in Coachella, California, which cut back on production after eight employees tested positive for COVID-19. Over the next month, as the growing season gets underway in northern states like Washington and summer crops of watermelon and tomato sprout in California, Elenes says the pandemic will hit workers in the fields.

In March, a coalition of 38 farmworker organizations sent a letter to the Trump administration demanding basic protections to H-2A visa workers. So far the administration has not responded and members of the coalition say it’s unclear what if anything they plan to do. On Friday, NPR reported that the White House is seeking to lower wages for the agricultural guestworkers in order to shift additional aid to U.S. farmers.

In the absence of state or federal assistance, the Immokalee Coalition has attempted to fill the leadership void, distributing flyers and broadcasting radio announcements to educate workers and their families about hand washing, social distancing and the symptoms of COVID-19. They’ve also installed hand washing stations for workers as they return from the fields. Long after much of the country had already done so, Gov. DeSantis issued a stay-at-home order that took effect April 3. But that will have little impact in a town like Immokalee, where nearly everyone works in agriculture and is therefore headed to the fields.