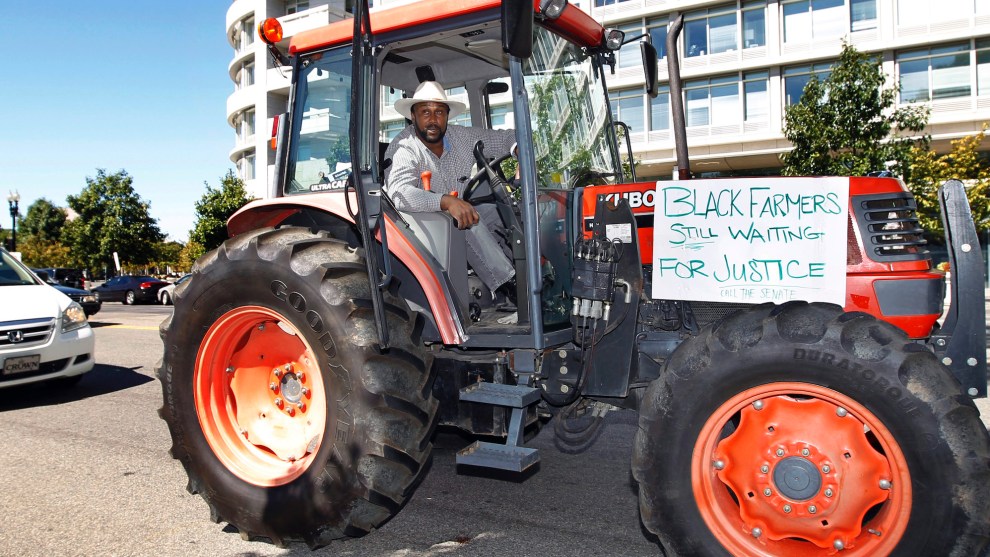 Virginia farmer John Boyd drives his tractor near the the Capitol in Washington in 2010.Manuel Balce Ceneta/AP

The US Department of Agriculture exists in part to help farmers “guard against uncertainties of weather and markets and to improve stability of the agricultural economy.” But for Black farmers, the department has been more a source of trauma than a haven against it. For decades, the agency systematically denied them access to the loans and other aid lavished on their white peers, contributing to foreclosures and land loss for thousands of farm families.

The trend has continued since. In 2020, the USDA’s Coronavirus Food Assistance Program delivered 97 percent of its $9.2 billion in agriculture aid to white farmers while largely giving Black farmers the shaft.

Until now, Congress had “done a lot more to protect the bald eagle than it had to protect us,” said John Boyd, founder of the National Black Farmers Association.

But the $1.9 trillion COVID-relief package known as the American Rescue Plan Act, on the verge of passage through Congress, would push the USDA down quite a new path. Included in the bill is $10.4 billion in support for agriculture—and this time, the aid won’t be allowed to bypass farmers of color. Nearly half of it will be targeted at what the USDA calls “socially disadvantaged” farmers, or those who have been “subjected to racial or ethnic prejudices because of their identity as a member of a group without regard to their individual qualities.” The group includes Black Americans, Native Americans, Alaskan natives, Latinos, Asian Americans, and Pacific Islanders.

The bill devotes $4 billion to debt relief for farmers of color with outstanding USDA loans. For comparison’s sake, the last time Black farmers won support from the federal government at anywhere near that scale, they required a class action lawsuit. The 1999 Pigford vs. Glickman case, which documented years of systemic racism against the USDA, ultimately resulted in a pair of settlements worth about $2 billion for Black farmers—a fraction of the value of land lost over decades of discrimination.

Based on the amount Congress allocated to Black farmers, the current COVID-relief bill amounts to the “most significant legislation for Black people since the Voting Rights Act,” said Virginia farmer John Boyd, founder of the National Black Farmers Association. It will help a remnant generation of Black farmers who are “fighting to hold on.” Before the bill, Congress had “done a lot more to protect the bald eagle than it had to protect us,” he added.

Another $1 billion in support would go toward other forms of aid, including grants to help families sort out tangled ownership issues triggered by farmers dying without a will. That situation was commonplace in the Jim Crow South, when Black people had scant access to legal services. And it lingers today—the “heirs’ property” problem, as it’s known, has left many Black farmers in financial limbo.

Bernice Atchison, an 83-year-old Alabama farmer and activist, applauded the $5 billion in aid, but said it was too little, too late for Black farmers of her generation who lived under the unrelenting stress of USDA discrimination. “Most of the people who would have benefited from that debt relief have died,” she said. “And that’s a shame.”

The new bill’s provisions have their roots in the Justice for Black Farmers Act, the landmark bill sponsored by Sen. Cory Booker last November. That bill’s headline proposal featured $80 billion in spending over 10 years to buy land and grant it to new and existing Black farmers, in repayment for the USDA’s long history of discrimination. It also included debt relief and other support, which Sen. Raphael Warnock (D-Ga.), along with Booker and others, broke out into a narrower bill, Emergency Relief for Farmers of Color Act, introduced in early February. The COVID-relief legislation about to hit President Joe Biden’s desk drew on Warnock’s proposal for its $5 billion in support for farmers of color.

That support survived the congressional process despite multiple attempts by Republicans to kill it with amendments. “We should never discriminate… and that goes both ways,” Rep. Trent Kelly (R.-Miss.) told the trade magazine Successful Farming last month. “Why should the color of your skin be the measure or whether you should get a USDA payback plan?” he added, apparently unaware of—or unconcerned by—the department’s long and well-documented history of intervening on behalf of white farmers at the expense of others.

While support in the COVID-relief bill will help keep some current farmers afloat, “much more work needs to be done to address the long-standing discrimination” that has helped trigger millions of acres of land loss, Boyd said. Righting that injustice, and “getting a new generation of Black farmers tilling the ground,” will require the land-reform provisions embedded in the Justice for Black Farmers Act, he said. He hopes to see that bill reintroduced by Booker and Warnock this year.