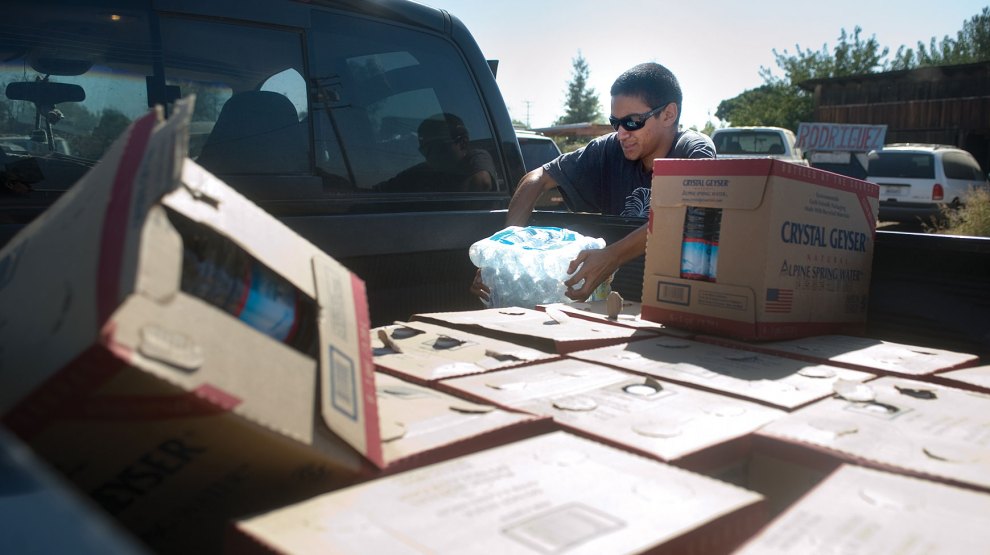 This story was originally published by the Food & Environment Reporting Network.

Deepak Palakshappa became a pediatrician to give poor kids access to good medical care. Still, back in his residency days, the now-associate professor at Wake Forest University School of Medicine in Winston-Salem was shocked to discover that a patient caring for two young grandchildren was food insecure. “Our clinic had set up one of those food drive boxes, and near the end of a visit, she asked if she could have any of the cans because she didn’t have food for the holidays,” he recalls.

Thirteen years later, Palakshappa’s clinic team now asks two simple questions of every patient to ascertain whether they’ll run out of food in a given month. But there are some critical questions they don’t ask: Do you drink your tap water? Is it potable and ample? Can you cook food with it, and use it to mix infant formula and cereal? Such questions could uncover some of the millions of Americans who are water insecure—a circumstance directly connected to food insecurity.

There’s no healthcare screener for water insecurity. The issue is not even on most public health professionals’ radar, although recent water disasters in Flint, Michigan, and Jackson, Mississippi, are starting to change that. Clinicians who are aware of water insecurity “are thinking, ‘If I screen for this, what am I going to do about it?’” says Palakshappa, noting the dearth of resources available to mitigate it.

There’s no healthcare screener for water insecurity. The issue is not even on most public health professionals’ radar.

Researchers know water insecurity isn’t confined to one region or population. But “we don’t know how big of a problem it is,” says Sera Young, an associate professor of anthropology and health at Northwestern University.  “And it’s going to keep biting us in the ass, because we’re not measuring these things correctly.” Public health researchers talk about food and nutrition, while water researchers are siloed in infrastructure circles, and it’s rare for the two worlds to overlap. Says Young, “We need to build a bridge between those two disciplines.”

Most estimates put US water insecurity at 2.2 million residents. Asher Rosinger, director of the Water, Health, and Nutrition Laboratory at Pennsylvania State University, says this is probably a “huge” undercount, and the actual number might be closer to 60 million. There are no official estimates of combined food and water insecurity, which makes it tough to understand the scope of the problem, let alone to propose solutions.

“We’re measuring water by how many cubic meters there are and dividing it across the land,” says Northwestern’s Young. “Or we’re measuring infrastructure, which is like, ‘Where do you get your drinking water from? Is it from a tap? Is it from a well? Is it from a borehole?’ But you can imagine 99 scenarios where you have a tap but you can’t pay for water to flow through it, or you don’t trust the water that comes out of it, or the infrastructure upstream of the tap has gone to shit. There are lots of reasons why measuring physical availability or infrastructure only gives you a pinhole peek of what the real problem is.”

The only way to truly understand water insecurity, Young says, is to consider people’s lived experiences as clinicians have learned to do with food access.

Accurate data are essential to closing the water gap because food insecurity increases the probability of water insecurity. In a study published last July in the Journal of the Academy of Nutrition and Dietetics, Young, Rosinger and a third co-author tracked 13 years’ worth of tap water avoidance among more than 31,000 US residents. They found that people who didn’t drink their tap water had 21-percent greater odds of also being food insecure than those who did. “Efforts to mitigate food insecurity should simultaneously address water insecurity issues, including tap water availability and quality,” the researchers concluded.

As with hunger, there are myriad reasons a person might be water insecure—some financial, some structural, and others having to do with quality and access. Still others are short-term predicaments brought on by disaster or a failure of local government.

You might think access to ample potable water is a basic human right. Legally, in the US, it isn’t (although California has taken a stab at making it so). Still, many Americans spend more than 12 percent of their income for water and sewer service. Others have lead pipes that contaminate tap water (Newark); or bacteria seeping into wells (Iowa); or sewage backing up into pipes during storms (Milwaukee); or nitrates running off farm fields (Las Vegas). A storm may knock out the electricity that pumps water (Puerto Rico), or knock out the pump itself (Jackson). Residents of the Navajo Nation lack basic water infrastructure. Then there are regions where aquifers are running dry, such as in California’s Central Valley.

Water poverty has a lot to do with health beyond the primary need to drink a couple of liters a day. Perhaps most consequentially, research shows that children exposed to lead can suffer developmental delays and brain damage. Rosinger also found that people who avoid tap water are more likely to drink sugar sweetened beverages (SSBs, in public health parlance). This alternative ups their risk for obesity, diabetes and other diet-related diseases, with the implications most long-lasting for children.

SSBs are one of the few issues that public-health researchers track that combine both food and water insecurity. Christina Hecht, a senior policy adviser at the University of California’s Nutrition Policy Institute, helped found the National Drinking Water Alliance in 2015, with a mission to improve access to potable water and educate people on the importance of drinking water instead of sugary drinks. “We discussed whether we needed to prioritize making sure that tap water was safe, but in 2015, we really didn’t think that that was a big issue,” she says. “Then Flint happened.”

Flint is just one in a long line of high-poverty communities now recognized for catastrophically unsafe water infrastructure. The city has a 29 percent food insecurity rate among its majority-Black population. In rural McDowell County, West Virginia, which will receive federal assistance to pilot wastewater infrastructure improvements, almost 32 percent of its (majority white) residents live below the federal poverty line. Century-old pipes, in some cases made of wood, bring in water so foul that residents capture creek water and store it in tanks. The most requested item at a local food bank? Bottled water.

The consequences ripple out from here. Someone who is water insecure can’t prepare food. Says Rosinger, “If your tap is dry, your water has been shut off, or you’re just avoiding it because you think it’s dangerous, you’re more likely to go out to eat. And research shows you consume a greater number of calories and have a lack of dietary diversity. So, it’s nutrition insecurity, too.”

Spending money on bottled water, which Rosinger says is “orders of magnitude more expensive than tap water,” might eat up $100 of a monthly food budget. For context, maximum monthly SNAP benefits are $835 for a family of four. A water-insecure mother might pay for bottled water to mix infant formula or cereal; women inclined to breastfeed might skimp on their own hydration.

A colleague of Palakshappa’s, Dr. Kimberly Montez, recently met with a food-insecure mother from Latin America whose baby was failing to gain weight. She didn’t trust the tap water enough to drink it, so she was under-hydrated, which made breastfeeding difficult. Instead, she turned to formula, but that presented problems, too, because she thought she had to buy expensive bottled water to make it, says Montez. If researchers can understand why people avoid their taps, they might better address fears and educate about the need for water over soda.

Young says questions around water trust and SSBs are a great start. “But don’t forget about cooking food. People are afraid of boiling pasta so we should be asking, Are you drinking your water? Are you cooking with your water? Are you bathing with your water? And are you pissed about your water situation?” There’s some legislative interest in requiring the National Health and Nutrition Examination Survey, which collects data on things like prevalence of diabetes and fruit and vegetable consumption, to add questions about water insecurity. “If we want humans to be healthy, we need to realize that’s a product of a lot of things and water is generally not on that list,” she says.

As to the question of how clinicians can assist people identified as water insecure, there are a few initiatives in the works. SNAP recipients can already use benefits to purchase bottled water, although it comes out of their broader food allotment. Nourish California, an anti-hunger nonprofit, ran a pilot this year to see what happens when water-insecure households get extra SNAP bucks to cover half their monthly water expenditures. The results are still being analyzed. “We know we got to fix the welds and we got to fix the pipes, but in the meantime, let’s not have people going hungry,” says Jared Call, a senior advocate at the organization.

Meanwhile, Young and her colleagues devised the Water Insecurity Experiences (WISE) Scales, which prompts researchers to ask questions about water availability, access, and reliability for domestic use. It’s similar to the Food Insecurity Experience Scale, which asks about access to nutritious food. Young says WISE provides common language to the food and water insecurity camps, since they rely on common measures and indicators.

“Evidence is growing—and plus it just makes sense—that water security underpins food security, so when you ‘fix’ water, a major driver of food insecurity is handled,” Young says. “By giving people the language to talk across the aisle, the beautiful thing is, this can be a win-win.”