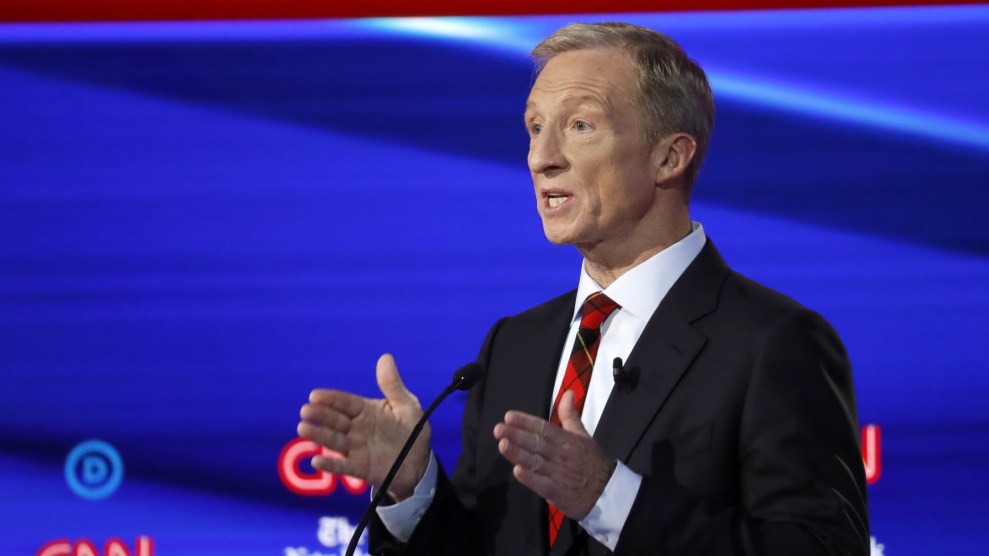 At last night’s debate, the Democratic candidates clamored for Donald Trump’s impeachment—and given recent poll numbers, the issue could be a political winner. But none of the Democrats owe as much to the idea of impeachment as Tom Steyer. For years, the billionaire activist has bankrolled an attempt to build a grassroots environmental movement with his NextGen advocacy groups. And beginning in 2017, Steyer poured money into Need to Impeach, a pro-impeachment group that was built largely around Steyer’s own image, that included Super Bowl ads featuring Steyer.

On the debate stage, Steyer was eager to talk about that history. “I started the Need to Impeach movement, because I knew there was something desperately wrong at 1600 Pennsylvania Avenue,” he said. “Impeaching and removing this president is something that the American people are demanding. They’re the voice that counts, and that’s who I went to, the American people.”

For Steyer, even qualifying for the debate was a challenge. Despite his own enormous personal wealth, DNC rules required him to accumulate at least 130,000 individual donors to make it onto the stage. So how does a billionaire who is self-funding his campaign convince average Americans to send him small donations? As we reported in July, the petition drive that Need to Impeach launched early in the Trump presidency appeared to form the backbone of this effort:

The petition, organized by the Steyer-founded organization Need to Impeach, hasn’t achieved its stated goal—but, according to the group, it has netted the names and contact information of more than 8.2 million people. Need to Impeach has bragged that its email list is larger than the National Rifle Association’s, and Steyer has reportedly poured more than $50 million into the group, even renting billboards in New York’s Times Square.

When he announced his run, Steyer said he would separate himself from Need to Impeach’s operations (as well as from NextGen’s). But Steyer did make use of all that information vacuumed up by his earlier political organizations, purchasing or renting the massive email contact lists they had built:

Since launching his campaign [a day earlier], Steyer has sent at least two emails to the Need to Impeach list and one to the NextGen list. The emails each contained multiple links to his campaign website or ActBlue page, both of which allow supporters to donate to Steyer’s campaign. The ActBlue page asks readers to “donate just $1 today to help Tom get closer to the debate stage.”

According to federal filings submitted last night, Steyer’s campaign paid Need to Impeach $390,000 to buy or rent computer equipment and email lists. Another $31,000 was spent buying equipment and renting email information from NextGen.

That’s nowhere near Steyer’s biggest expense—he spent about $47 million in all last quarter—but it did help his campaign rake in more than $1.4 million in small donations. And it helped him score a coveted spot in the debate.