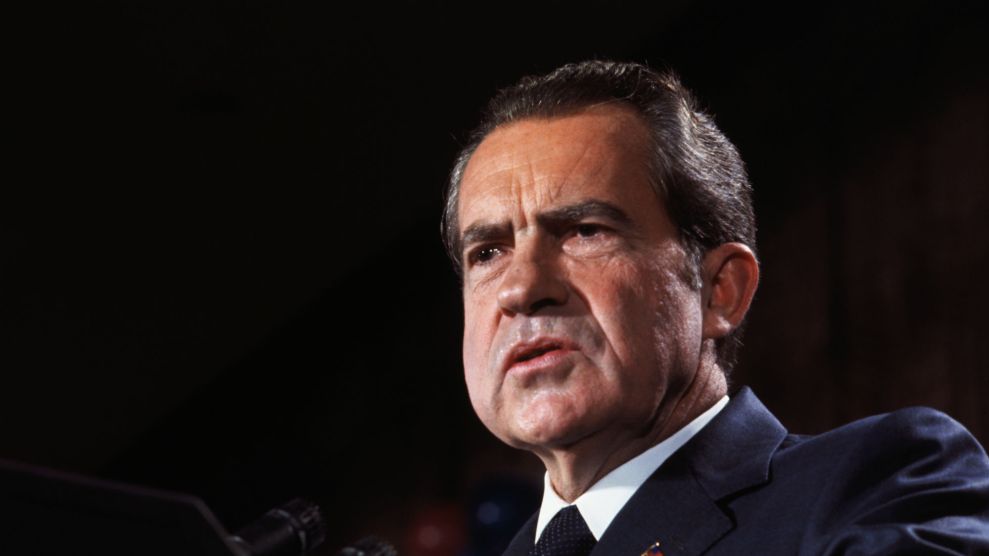 With acting White House chief of staff Mick Mulvaney’s disastrous press conference continuing to make waves and impeachment looming for President Donald Trump, it’s worth looking back at one of the major inflection points leading up to Richard Nixon’s resignation: the Saturday Night Massacre, which occurred 46 years ago Sunday.

For most of 1973, Nixon’s presidency trudged along, despite the must-see-TV hearings held by the Senate Watergate Committee and the appointment of Archibald Cox as special prosecutor. But on October 12, a federal appeals court ruled that Nixon had to give up official documents and recordings to Cox. Eight days later, on Saturday, October 20, Nixon demanded that his attorney general, Elliot Richardson, fire Cox. Richardson refused to do so and resigned from his position; Nixon then demanded the same of Deputy Attorney General William Ruckelshaus. He also refused and resigned. The third in line for the task, Solicitor General Robert Bork, finally complied with Nixon’s order.

The Saturday Night Massacre became known as a turning point in the timeline that eventually led to Nixon’s historic resignation. As the late journalist Helen Thomas remembered it in a 2009 interview, “These things don’t happen in America. I really think that it showed how bereft Nixon was, and how he was on the ropes.” On November 17, 1973, just four weeks later, Nixon uttered his infamous denial: “I am not a crook.” Nixon would eventually resign on August 8, 1974.

As former Obama Cabinet Secretary Chris Lu pointed out on Twitter on Wednesday, support for Trump’s impeachment and removal from office is higher now—by a lot—than it was for Nixon after news of the Saturday Night Massacre hit. In November 1973, for instance, a Gallup poll found that support for the president leaving office jumped from 19 percent in June of that year to 38 percent. Majority support for Nixon’s removal from office didn’t happen overnight; by the time Nixon resigned, support for him to leave the post had reached a record high of 57 percent.

For Trump, support for impeachment and removal from office just hit a new high earlier this month: 51 percent of Americans, according to a poll by Fox News.

Meanwhile, if you feel like continuing even further down the impeachment rabbit hole, my colleague Tim Murphy makes a compelling argument that Trump is actually less Nixon—and more Andrew Johnson.