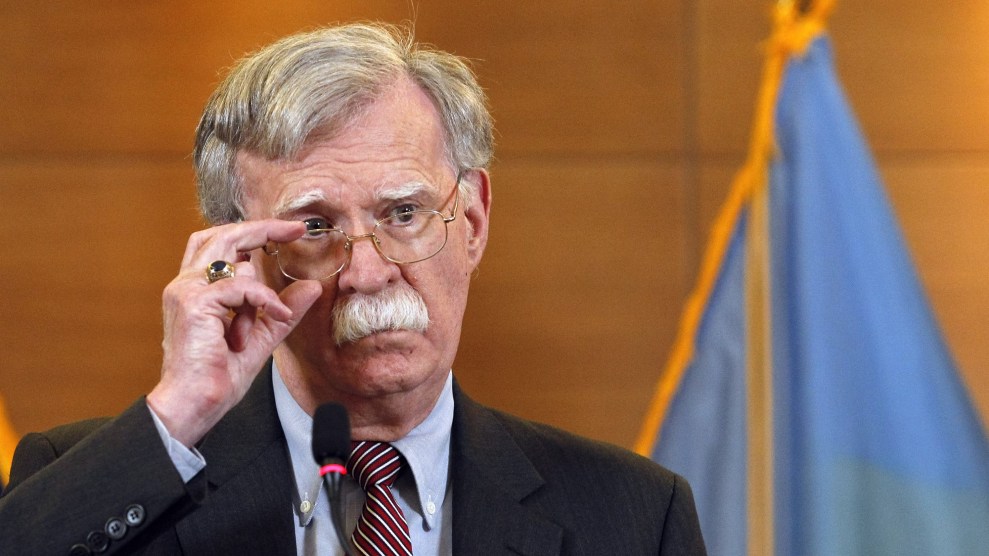 Leaked details from John Bolton’s unpublished manuscript have sent President Donald Trump’s impeachment defense into chaos—and at least one Bolton’s acolyte is not happy about that at all.

“It was crushing to read weekend press reports that my friend and former boss John Bolton plans to publish a tell-all book on his time as President Trump’s National Security Adviser,” Fred Fleitz, who served as Bolton’s chief of staff on the National Security Council, wrote in a Fox News opinion piece Monday. “Given the importance of protecting a president’s confidential discussions with his senior advisers, I strongly disagree with Bolton’s decision to release the book before the November presidential election and call on him to withdraw it from the publisher immediately.”

Bolton’s forthcoming book, The Room Where It Happened: A White House Memoir, is scheduled to be released by Simon & Schuster in March. The New York Times reported last night that the book includes “dozens of pages” about the Ukraine scandal, including details from a private conversation in August, in which Trump told Bolton that “he wanted to continue freezing $391 million in security assistance to Ukraine until officials there helped with investigations into Democrats including the Bidens.”

The eleventh-hour revelation has renewed calls from Democrats for Bolton to testify before the Senate. He declined to participate in the House’s investigation, citing the White House directive barring testimony from senior officials, but he said earlier this month that he would testify in the Senate impeachment trial if subpoenaed. Republicans blocked Democratic efforts to issue such a subpoena last week, but some Republicans have suggested they may vote to approve a subpoena later in the trial.

Trump has said Bolton should not testify due to national security concerns. In his piece, Fleitz echoed that argument, but seemed more concerned with the effect Bolton’s book could have on Trump’s reelection chances. “If a manuscript of this sensitivity was to be published at all, this should happen after the election, not in the spring of 2020,” Fleitz wrote. “I don’t understand the need for a former National Security Adviser to publish a tell-all book critical of a president he served, especially during a presidential reelection campaign that will determine the fate of the country.  There will be a time for Bolton to speak out without appearing to try to tip a presidential election.”

A longtime Bolton associate who has defended Trump frequently on Fox News programs, Fleitz said on Twitter that he wrote the piece criticizing his boss “with a very heavy heart.”