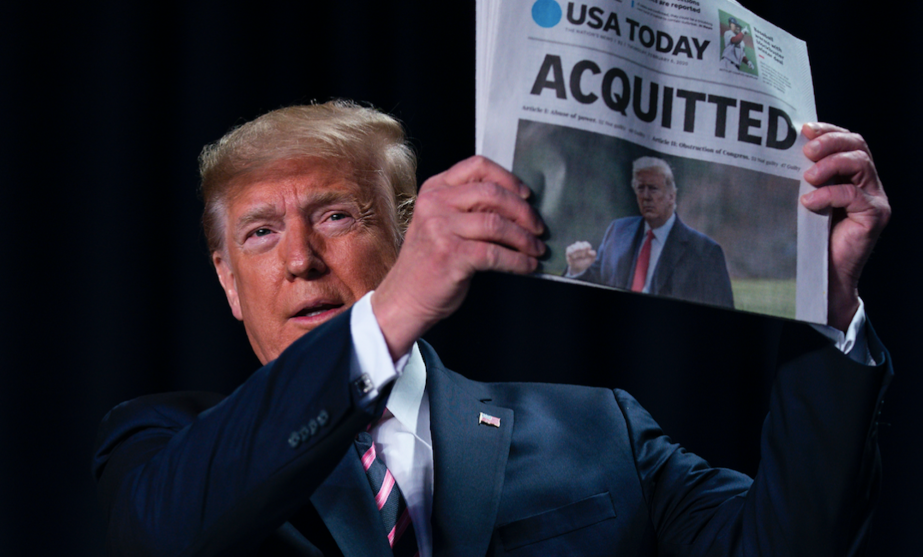 The National Prayer Breakfast, an annual gathering hosted by members of Congress for faith leaders, would hardly seem like an appropriate setting for a vengeful outburst. But on Thursday morning, President Donald Trump appeared to do just that. Speaking at the annual event in Washington, Trump opened his remarks by lashing out at the impeachment trial, while taking thinly-veiled aim at Sen. Mitt Romney (R-Utah) and House Speaker Nancy Pelosi.

“As everybody knows, my family, our great country and your president have been put through a terrible ordeal by some very dishonest and corrupt people,” Trump told the crowd, his voice sounding more hoarse than usual. “They have done everything possible to destroy us and by so doing, very badly hurt our nation. They know what they are doing is wrong, but they put themselves far ahead of our great country.”

Both Romney, who is a Mormon, and Pelosi, a Catholic, have cited their faiths while opposing the president during the impeachment trial. “I am a profoundly religious person,” the Utah senator had said in an emotional speech announcing his vote to convict Trump. “I take an oath before God as enormously consequential.” Pelosi, who also attended Thursday’s prayer breakfast, has repeatedly said that she was praying for the president throughout the impeachment proceedings.

Trump, who counts evangelical Christians among his most loyal supporters, would have none of it. “I don’t like people who use their faith as justification for doing what they know is wrong,” he continued. “Nor do I like people who say ‘I pray for you’ when they know that that’s not so. So many people have been hurt and we can’t let that go on.”

Before launching into his furious remarks on Thursday, Trump beamed as he held up two newspapers reading “ACQUITTED” and “Trump Acquitted,” a victory lap swiftly erased by his own revenge politics moments later. Many watching on social media weighed in on the president’s conduct at the normally staid event:

I've studied the National Prayer Breakfast a good bit, and I can't say how bizarre it is for a president to use the moment — traditionally one devoted to bipartisanship and unity — to strike such a petty, vindictive tone at the event. pic.twitter.com/bFJN1PmUoi

The White House, naturally, had its own version of what took place.

President @realDonaldTrump addressed the National Prayer Breakfast this morning. "We come together as one Nation blessed to live in freedom and grateful to worship in peace." pic.twitter.com/7vGyKwZX6X