RETURN TO REAGAN….Conservatives are now going to spend the next few years talking about the future of their movement, the same way we liberals have been talking about ours since 2002. I suppose I’ll pop in and kibbitz once in a while, but for now I just want to throw out one thought: the Republican Party needs to return to Reaganism.

Obviously I won’t get any argument on that score from conservatives, but here’s the thing: they need to return to actual Reaganism, not the Reagan myth they’ve created over the past 20 years. The problem with George Bush was never that he was too conservative (he had a distinctly mixed record on that score), nor that he “abandoned” conservatism (like it or not, it’s just not true that he lost popularity because he overspent in his first term). 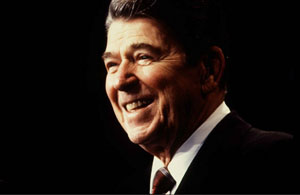 The fact is that throughout his presidency he remained a fairly popular figure among rank-and-file Republicans, if not the conservative intelligentsia, but eventually cratered among center-right independents. And that happened, I think, because he lacked any sense of pragmatism. He was surrounded, as Ron Suskind told us eight years ago, by Mayberry Machiavellis who disdained policy and ground-level reality, and instead evaluated everything that crossed their desks based solely on its partisan appeal and ideological purity. He was surrounded by single-minded zealots like Dick Cheney and David Addington who reinforced his worst tendencies, shredding the constitution and institutionalizing torture in the service of endless foreign war. He appointed cronies to jobs that required actual expertise and ignored to the end the fiscal disaster of policies dedicated solely to protecting friendly corporations and the rich. He himself maintained his intellectual incuriosity throughout, never doubting that a modern country of 300 million people could be governed by gut feeling. No presidency, either liberal or conservative, can survive that. It produces incompetence, disaster, rot, and eventual popular rebellion.

But whatever the reason, he had it. He slashed taxes in his first year, but when that produced gigantic deficits he raised them the next — and then raised them again every single year of his presidency. (He kidded himself that he was just “closing loopholes,” but he did it nonetheless.) He favored partial privatization of Social Security, but when it became clear that he couldn’t get that he called Alan Greenspan and had him put together a mainstream, bipartisan rescue plan. He won office on the back of social conservatism, but he was the president who originated the Republican tradition of delivering speeches to the annual pro-life rally in Washington DC by phone because he didn’t want to be too closely associated with them. He drove up defense spending and called the Soviet Union an evil empire, but when the Kremlin finally produced Mikhail Gorbachev he did business with him. To the consternation of conservatives everywhere, he eagerly embraced arms control talks with Gorbachev and eventually signed the INF treaty.

This isn’t some kind of ode to Reagan. Reagan was a dedicated, sometimes primitive conservative with plenty of failures to his credit, and I opposed nearly everything he did. But I’m talking about what conservatives need, not what I want or approve of. And unlike George Bush, Reagan seemed to instinctively understand the limits of what was possible and what the country would accept. If the Republican Party continues to embrace Bushism and the messianic, know-nothing Texification he brought with him (current incarnation: Sarah Palin), it will continue its intellectual and popular decline. But if it regains its pragmatic Reagan streak, who knows? They could be back and giving Dems a run for their money sooner than anyone thinks.