THE FINANCING PROBLEM….One of the things that will keep the U.S. housing market in the doldrum for years, even after prices bottom out, is that so many homeowners are upside down on their mortgages: they owe more on their homes than they’re worth. Well, guess what? The auto industry has the same problem. 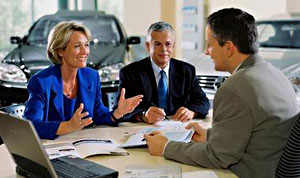 Stephanie Mencimer, author of the terrific book Blocking the Courthouse Door, reports over at our main site:

According to industry analyst Art Spinella, president of CNW Research, fully 85 percent of Americans with a car loan have negative equity. Other studies show that these loan holders, on average, owe $4,400 more than their cars are worth.

….Unbeknownst to most car buyers, dealers [] routinely—and legally—bump up the interest rate offered by the bank or finance company in exchange for kickbacks from the lenders, which are often the manufacturers themselves. And in many cases, dealers encourage customers to trade in a car that isn’t worth the amount of their current loan by offering to roll the old loan into the new one, thus inflating the principal and making the loan more lucrative for the lender. That’s how people can end up owing $40,000 on a Ford Focus. This only works because auto lenders now stretch out the terms to six or seven years to make the payments affordable, a practice that virtually ensures that many cars won’t last as long as the loan.

But nobody could have predicted etc. etc., right? Uh huh:

In 2004, major auto analysts noted that the lengthening loan terms and the increasing number of potential car buyers who were upside down on loans would lead to no good end for the auto industry, and GM in particular. Deutsche Bank analyst Rod Lache was prescient when he told Automotive News that the negative equity problem would only get worse if the automakers didn’t address it. Observing that the average amount of money owed by someone trading in a car with negative equity had jumped from $2,900 to $4,000 in just a five-month period, he wrote, “The impact on US demand, price and mix from this phenomenon could be devastating, particularly if the impact is compounded by rising rates.”

Read the whole thing here. This is yet another problem that has to be addressed if the auto industry is going to be successfully bailed out. After all, it doesn’t do any good to give them a bunch of bridge loans unless they can figure out a way to get their customers back, and that’s easier said than done. Caveat emptor.