HIGH-SPEED RAIL….John Judis makes the case for a big piece of the stimulus package to be spent on high-speed rail:

One area that is ripe for such investment — and that is not, from what I have seen, a declared priority of the Obama administration — is high-speed rail. Amtrak’s Acela trains — the closest thing we have to one — average less than 100 mph between Washington D.C. and Boston, whereas trains in Western Europe and Japan go more than twice as fast. 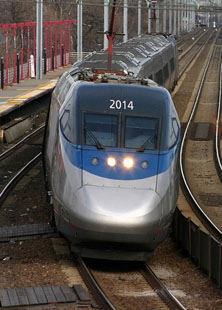 Many of them also run on electricity. They would be the most energy-efficient and quickest means of getting between places like Boston and New York, or Los Angeles and San Francisco. But they would require a massive investment. For instance, installing high-speed rail in the Northeast corridor could cost about $32 billion, while California’s high-speed rail system would require up to $40 billion. A system that would address the other areas of the country could easily raise the cost to the hundreds of billions. The House transportation and infrastructure committee has currently proposed $5 billion in stimulus funds for intercity rail–not even a down payment on what it would cost to convert the U.S. to high-speed rail.

Investing in high-speed rails would be very expensive, but unlike tax cuts — the benefits of which can be siphoned off in the purchase of imported goods — the money spent would go directly to reviving American industry and improving the country’s trade balance. That doesn’t just mean jobs creating dedicated tracks or new rail stations: Though the U.S. abandoned train manufacturing decades ago to the French, Germans, Canadians, and Japanese, this kind of production could be undertaken by our ailing auto companies or aircraft companies — if the federal and state governments were to place orders. And building trains that would run on electricity would be a paradigmatic example of the “green jobs” that Obama often touts.

I agree with some of this. The train manufacturing part seems like small potatoes, and I have my doubts that there’s anything to be gained from trying to revive that particular part of the American manufacturing scene. On the broader picture — and I say this even though I live in California — I’d be happiest with a large and highly targeted investment in high-speed rail in the northeast. Most medium and long-haul rail projects in the U.S. are both iffy in conception (LA-San Francisco is really at the bleeding edge of what’s likely to be workable for high-speed rail) and so far from being started that they’d have no immediate stimulative impact at all. The northeast, by contrast, fairly cries out for a modern, fast, European style rail system. It’s geographically compact and densely populated; its residents are fairly train-centric already; and most of the terminal cities have good public transit. That’s not really true of any other region in the country.

Unfortunately, this is a political minefield. There’s no way Congress will allocate tens of billions of dollars to the northeast unless lots of other congressional districts get their pet rail projects too. Amtrak has always been a porkfest, and it’s not clear that anyone has the political will to put a stop to it.

But maybe! Common sense suggests that high-speed rail in the northeast corridor would be a pretty good national project to get started on, and other regions of the country should probably focus either on urban subway/light rail projects or on non-transit spending. For now, the northeast ought to be both a showcase and a pilot project for serious high-speed rail. If the French can do it, so can we.