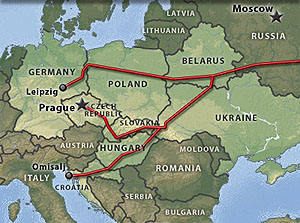 So Russia has closed the taps on its pipeline and no gas is flowing to anyone. Robert Farley takes a stab a figuring out who’s really at fault in this spat:

On balance (and at risk of being once again denounced as a Kremlin stooge) I’m rather less sympathetic to the Ukrainian case; of course accepting a discount from a Russian national gas concern was going to give Russia influence over Ukraine. That’s the price of doing business. I’m singularly uncompelled by the notion that Russia supplying energy to Europe gives the Russians some kind of undue, ominous influence over European affairs, any more than the folks down at Chipotle have ominous influence over me through their control of burrito supplies. Market transactions inevitably create short term dependence, but of course that goes both ways; Russia can interfere with supply only at significant cost to Russia.

Even at the higher prices Russia wants to charge Ukraine, the Ukranians would still be getting gas at a discount. And Ukraine’s previous contract only ran through the end of the year. So I think I agree with Farley: although regional power politics are obviously behind Russia’s actions, this is still primarily a commercial issue. Both Gazprom and Ukraine are in pretty serious economic straits right now, and neither one wants to back down. It’s more a routine dispute over money than anything else.

UPDATE: In the Financial Times, Jérôme Guillet and John Evans provide more background. Nickel version: Russia and Ukraine have been fighting this exact same fight for a long time and they both know that neither side can do without the other. So a few years ago Gazprom “solved” its Ukraine problem by privatizing much of its gas trade: customers would pay less for their gas, but they’d pay a third-party supplier who was supposedly unrelated to either Ukrainian gas authorities or Gazprom:

Political infighting in Ukraine can largely be understood by the struggle to be the Ukrainian counterparty to the trade. (It is no coincidence that Yulia Tymoshenko, the prime minister, made her fortune in gas trading in the 1990s and that Viktor Yanukovich, the pro-Russia opposition leader, represents some of the largest heavy industrial gas buyers in eastern Ukraine.) In Russia, similarly, both the Kremlin and Gazprom are rife with infighting between shifting coalitions.

So while the world focuses on the predictable brinkmanship between Ukraine and Russia, the real fight over the share-out is taking place more discreetly between a few oligarchs in Moscow and Kiev. This is perhaps the whole purpose of the noisy puppet show. Worries about Russia or Gaz­prom using the “gas weapon” against Europe are misplaced. In their official capacity, both are keenly aware of their absolute dependency on exports to Europe for a huge share of the country’s income, and on the need for stable, reliable, long-term relationships to finance the in­vestments needed in gas infrastructure.