WHO’S AFRAID OF THE FILIBUSTER?….Steve Benen explains why there’s support for the filibuster in both parties:

The status quo is a mess. The American electorate can give a party the White House and sizable majorities in both chambers, but that party will still struggle badly to pass its agenda. A 41-member minority party can block legislation — controversial or not — by abusing an obscure procedural tactic that was never intended to be used to necessitate supermajorities on literally every piece of legislation. 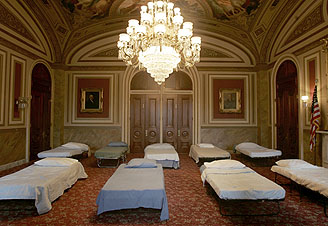 Tradition and custom are part of the answer, but mostly it’s fear.  Fear of what the other guys will do when they eventually come back into power.  Both parties are so afraid of what their opposite numbers could do with simple majority rule that they’ve lost sight of what they could do with it.

This is especially short-sighted coming from liberals.  I got several emails after my last filibuster post suggesting that I should think twice.  What if the GOP had been able to get all their judicial nominees through during the past eight years?  What if Bush had passed Social Security reform?  What if, what if, what if.

But look: only a handful of Bush’s judges were successfully filibustered.  Social Security reform never even came up for a vote.  But even conceding that, yes, there would be some short-term pain from conservative rule in a filibuster-less world, in the long run the filibuster is bad for liberalism because liberals are fundamentally in favor of change and the filibuster is fundamentally obstructive.  It’s well suited for a movement that wants to stand athwart history and yell “Stop!” but less well suited to a movement that has a positive agenda revolving around the enactment of ambitious new social programs.

This makes it unsurprising that conservatives want to keep the filibuster around.  They know perfectly well that once liberal social programs are enacted, they become very popular and very hard to get rid of.  They can’t count on the swing of the pendulum to eventually turn the public against Social Security or Medicare or national healthcare, so their only alternative is to stop programs like this in the first place.  For them, the filibuster is a key tool.

But not for us.  Sure, if we get rid of the filibuster we’ll pay a price when Republicans get back into power.  But overturning conservative programs isn’t that hard.  And in return we’ll make a lot of progress during out own time in office, progress that’s largely permanent.  But only if we have the courage of our convictions.  If we truly think that our programs will work and become popular, then we shouldn’t worry about what will happen when the opposition eventually returns to power.  We should be more concerned about what we can do while we’re in power.  And the answer is: a lot more.  Throughout history, the filibuster has been a tool that makes America a more conservative place, and any liberal who’s afraid to get rid of it is crazy.