Bruce Ackerman is unhappy that lots of powerful executive branch appointments can be made without Senate approval:

Modern presidents have increasingly gained the power to make key appointments unilaterally — with President Obama taking this process to new heights. His White House czars such as Lawrence Summers and Carol Browner are likely to overshadow the Cabinet secretaries in their respective domains. Yet, as presidential assistants, they escape the need for Senate scrutiny.

….Consider, for example, the treatment accorded Eric Holder as attorney general and Gregory Craig as counsel to the president. Holder was carefully vetted by the Senate, and his work in previous administrations was the subject of much debate. Yet Craig, who will also be involved in important and public legal matters, largely escaped scrutiny. Why?

Craig, a distinguished lawyer and public servant, is an outstanding choice for his key position. But it is not enough to trust the president to make good appointments. 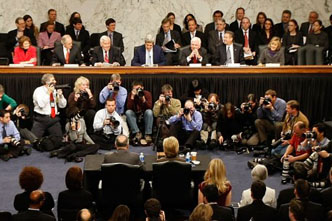 The challenge is to make it difficult for future presidents to appoint less-qualified officials — such as Alberto Gonzales or Harriet Miers — without serious outside review of their credentials. That, after all, is the aim of our system of checks and balances.

Ackerman has a point, but here’s a different suggestion: how about doing away with Senate confirmation entirely? It wastes tons of committee time, it promotes endless grandstanding by bloviating pols, it discourages all but the hardiest from working for the government, and — most important of all — it doesn’t actually seem to produce a better class of appointees, does it?  Is the country really better off with a system that confirms Alberto Gonzales but deep sixes Tom Daschle?  Has the White House staff, on average, been any less competent or less honest in recent years than the Senate-confirmed cabinet staff?  Does the Senate, as Ackerman would like, really make it difficult for presidents to appoint underqualified officials?

The Senate would never agree to give up its precious consent privilege, of course, but I’m frankly not sure they add much to the process these days.  In the meantime, allowing the president to have a White House staff of his choosing — whether I like his choices or not — seems more important than providing yet more cannon fodder for the greatest deliberative body in the world.  They’ve got plenty to chew on already.