One of Ezra Klein’s readers argues that there are some practical problems to nationalization that its supporters haven’t addressed.  One of them is the contagion effect:

Take JPMorgan Chase, for example….It continues to operate from a position of relative strength, meeting capital requirements, and it still has a significant market capitalization. Yet it has also taken TARP money. Should JPMorgan Chase be nationalized in this scenario? If you say yes, why?….And what do you do when you seize JPMorgan Chase? Do you keep management, which did better than just about anybody else? Or get rid of them? Do you really think you’re going to find a better CEO than Jamie Dimon? 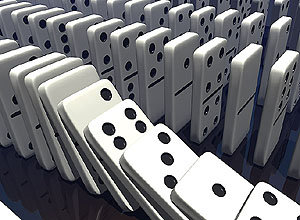 ….And if you say no, let them stay private, consider the fate of this bank if other large banks are nationalized. Investors would flee the stock, fearing it was next. Short sellers would pummel the stock. The company would face a difficult time raising capital. Business customers would flee to government-owned banks. It would be, as Blinder argues, just a matter of time.

This is a real issue, but there’s also a fairly straightforward answer: do all the nationalizations at once.  The Treasury Department is already moving ahead with its “stress tests” of large banks, and if they chose to, these tests could be used to decide which banks need to be nationalized and which ones don’t.  Then, once the tests are done, the findings are announced at a stroke.  Banks A, B, and C are being taken over.  Everyone else gets a clean bill of health.

If anything, this would help banks like JPMorgan (assuming they passed the stress test, of course).  After all, investors are fleeing bank stocks already, and a firm statement of who’s healthy and who’s not would give investors some basis for thinking that the healthy banks really are healthy and aren’t going to be taken over.  Business customers would also be reassured, and the Fed has made money so cheap, and set up so many term lending facilities in the past year, that non-nationalized banks would almost certainly compete on an equal footing with the banks that are government owned.  That’s how it worked in Sweden, where two banks were nationalized during their banking crisis without bringing down the others.

There are plenty of technical and operational issues with nationalizing gigantic banks, but the contagion argument strikes me as one that can be addressed fairly effectively.  If the tests are seen as fair, and the results are announced all at once, the system will not only survive, it’s likely to be strengthened.