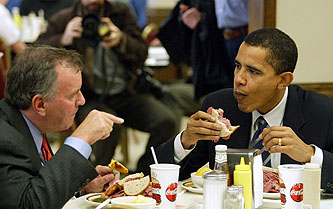 Matt Yglesias is unhappy with Matt Bai’s dismissive attitude toward political scientists.  Bai says sniffily, “My dinnertime conversation with three Iowans may not add up to a reliable portrait of the national consensus, but it’s often more illuminating than the dissertations of academics whose idea of seeing America is a trip to the local Bed, Bath & Beyond.”  Matt responds:

The events of the day play out against a larger structural backdrop. And it’s just not possible to try to understand them a-theoretically. What journalists unschooled in political science tend to do is to substitute prejudice for understanding. So you notice that in Maryland and Virginia there are a lot of well-to-do Democrats and start writing stories which presuppose that poor people are generally Republicans and rich people are generally Democrats. An alternative approach would be to read Andrew Gelman’s book and you’d see that this is an idiosyncratic feature of a small portion of the country and that, overall, high income is a strong predictor of Republican voting.

To some extent, this is just the usual battle between the hacks and the wonks, between researchers and reporters, or (from my past life) between sales and marketing.  The obvious and boring answer to all this is that both are important: you need to talk to real people and you need to understand the larger trends and forces that shape their attitudes.  But willy nilly, most of us tilt toward one side or the other.

In the case of journalists, one reason they tilt toward the a-theoretical side is that they’re in the business of generating human interest.  Not only is that what their readers want to read (including me, even though I’m firmly on wonk/researcher/marketing side of things), but it’s the only way to produce daily stories that are meaningful.

Here’s an example that I’ve struggled with a bit: Why did Barack Obama win last year’s election?  My answer — and I genuinely think this is right — is that he won because two fundamentals were overwhelmingly in his favor: (a) a Republican had been in the White House for eight years and (b) the economy was failing.  Put those two factors together and Obama was a shoo-in to win by about 6-8 points in the popular vote.  And guess what?  He won the popular vote by a little more than 6 points.

But there’s a corollary here that’s hard to ignore.  If you believe this, then it means that Sarah Palin didn’t matter.  Jeremiah Wright didn’t matter.  McCain’s meltdown over the economy didn’t matter.  Obama’s phenomenal fundraising and state organization didn’t matter.  None of that stuff mattered.  McCain just had too big a hurdle to clear.  As long as Obama avoided some kind of epic gaffe, he was going to win.  All the ink spilled on strategy and tactics and debates and campaign finance and dinners with Iowans was just so much hooey.  None of it mattered.

But that’s a tough nut to swallow, isn’t it?  I’m pretty deeply into this stuff, and even I can’t really swallow it.  What’s more, it makes for really lousy journalism.  So instead we get the stories.  They may or may not represent reality, but at least they’re interesting.