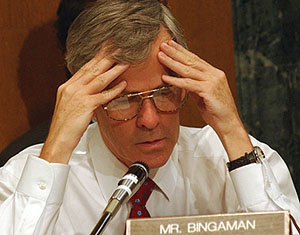 Via Gristmill, I see that Sen. Jeff Bingaman (D–NM), chairman of the Energy and Natural Resources committee, has decided to preemptively surrender on global warming:

Bingaman said any Congressionally developed system capping and trading emissions probably will include carbon allowances given to polluters like cement factories and coal-burning power plants, along with permits that are sold.

Auctioning 100 percent of the permits would essentially make polluters pay quickly for emissions. In the European Union’s Emissions Trading Scheme, emissions permits were given away to polluters at first. This led to a glut of permits and windfall profits for some emitters.

….”I think it’s unlikely we will pass a cap-and-trade bill with 100 percent auction,” Bingaman told reporters at the Platts Energy Podium.  He said such a system has the risk of substantially increasing the burden on some utilities and major emitters.

There are lots of bells and whistles that you can add to a cap-and-trade plan: safety valves, circuit breakers, banking, offsets, and other buzzwords by the truckload.  Some are mostly good (banking), some are mostly bad (offsets), and some are in between (safety valves and circuit breakers).  All of them are things we should care about getting right, but they’re also things where, inevitably, we’re going to have to compromise.

Auctioning permits is different.  This is the one thing that ought to be a deal-breaker in any cap-and-trade plan.  I talk about this in my cap-and-trade piece in the print magazine this month:

4. There ‘s no such thing as a free permit. One of the key issues with any cap-and-trade system is how you allocate permits. Power plants would like to get them for free, and at first glance this seems appealing. If you set the overall carbon cap at 90 percent of current levels, and allocate only that number of permits, that should reduce carbon without raising prices for the consumer. After all, the power plants didn’t have to pay for the permits, so there are no costs to pass along. Right?

Oddly enough, no. The economic theory involved is a little hairy, but those permits have a value on the open market, and that means that in many cases marginal producers can make more money selling their permits than by producing power. They’ll only be willing to produce power if they can raise prices enough to make the power-producing business more profitable than the permit-selling business, and eventually everyone will jack up prices to follow suit.

This may sound abstract—even a bit fantastical—but it’s absolutely real. In fact, when permits in phase one of Europe’s ETS system were handed out for free, electricity prices rose and power companies pocketed a windfall profit (which Britain’s Department of Trade and Industry estimated at about $1.1 billion a year in the UK alone). Dale Bryk, an attorney with the Natural Resources Defense Council (NRDC), puts it bluntly: “If you ask them point-blank if they’ll charge customers for free permits, they won’t tell you. But they know they will.”

A better way is for the government to hold an auction to set the price of permits. This has a couple of extremely salutary effects. First, it puts everyone on a level playing field (since Congress has no ability to allocate permits to favored interests). Second, and even better, the money from selling the permits goes to the federal government, not to the carbon emitters. That’s a pretty useful revenue stream, one that would probably start out at about $20 to $30 billion per year and go up steadily as the cap came down and the price of carbon permits increased.

There are loads of special interests who hate the idea of a 100% auction, of course.  But once you start giving away permits, you’ll never stop.  It is, plain and simple, a massive giveaway to existing power plants, and as the Europeans learned it makes a mockery of any serious cap-and-trade plan.

This all sounds very wonky, but it’s a hill to die for if you care about reducing greenhouse gases.  Without a 100% auction, cap-and-trade is a bad joke.  Somebody needs to tell Bingaman to start listening to the coal lobby a little less and start caring about effective public policy a little more.

UPDATE: I was going to add something about the politics of this, but the post was already long so I decided to skip it.  Luckily, Matt Yglesias does it for me:

When you’re a Democratic Senator, you often face a conflict of interests. On the one hand, you would really like to sell out to anti-reform special interests. On the other hand, you can’t openly portray yourself as someone who wants to sell out. One appealing option is to do what Bingaman does here and just cite unspecified political obstacles. Not that the obstacles aren’t real. But in the U.S. Senate they’re also people, with names. But instead of naming names, Bingaman’s just offering the vagueness play. He’d love to do the right thing, but it’s “unlikely” to happen. And everyone can do this. Nobody needs to be the Senator who’s against a public plan in health care, or who’s against a 100 percent auction. Instead, everyone’s just being practical for the sake of someone else.