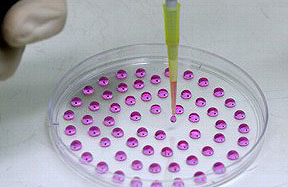 Hey, it was bound to happen sometime.  And of course, I only agree with him halfway.  But he’s right when he says this about President Obama’s decision to allow much broader federal funding of embryonic stem cell research:

What you think of his policy depends on what you think of the moral status of embryos….That legitimate dispute underlies the stem cell debate. But that is not the ground on which the president made his case yesterday. He argued that to deny free rein to stem cell science is to ignore and reject the promise of science as such. In a barely concealed swipe at his predecessor, he pledged that his administration would “make scientific decisions based on facts, not ideology.”

The executive order Obama signed omits any mention of ethical debate….The issue, he suggested, is a matter of science, not politics.

Politics is politics, and presidents always frame their decisions in ways they think will be the most acceptable to the most people.  But this annoyed me when I read Obama’s statement yesterday, and I don’t blame Levin for being annoyed either.  If you think an embryo is a human life — and lots of people do — then you’re going to be opposed to embryo research.  If, like me, you don’t, then you’re not likely to have any objection.  But although science can inform that debate, it can’t resolve it.  Ethics and ideology will always be front and center.

I guess I wouldn’t care too much about this except that Obama also issued a memo yesterday about eliminating political interference with science.  That’s important, and it applies to important subjects like global warming, habitat protection, GM foods, Plan B, and other things.  But its impact is diluted if we pretend that everything is a scientific issue.  There’s nothing wrong with admitting that both Bush’s stem cell decision and Obama’s have strong moral and ideological dimensions, and denying it tends to reduce our credibility when we insist on the underlying science of other issues that really are mostly scientific.  In this case, honesty really is the best policy.