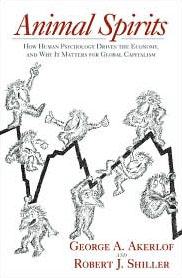 and therefore to preventing depressions as well as inflations, has been falsified. The Federal Reserve has pushed interest rates way down, but the amount of lending has been tepid and economic activity has continued to fall.

There are two problems with this.  The smaller of them is Posner’s apparent contention that until now economists have believed that monetary policy alone is sufficient to prevent depressions.  This is a crude exaggeration.  The whole point of Keynesian stimulus, after all, is that it’s supposed to kick in when monetary policy has reached a lower bound and has no further traction.  That would hardly even be a topic of conversation if everyone believed that monetary policy alone could solve every economic ill.

But the bigger problem is that we’ve really only tried half of Posner’s prescription: lowering interest rates and pumping liquidity into the market during a downturn.  And he’s right that it hasn’t been enough.  But there’s also the flip side: moderating credit expansion during upturns, something that Alan Greenspan signally declined to do during the housing boom.  If he had, though, the housing bubble wouldn’t have gotten anywhere near as big as it did.  It still would have burst eventually, but the downturn would have been more modest: probably a fairly ordinary recession to be fought with fairly ordinary monetary means.

I’m generally a fan of more robust countercyclical economic policy, but our recent experience (not to mention the unbroken experience of the past several centuries) prompts a big question for people like me: How do you ensure that it happens not just during downturns, when everyone is eager for it, but also during upturns?  Part of the problem is technical — when should you intervene to slow things down? what’s the best way to do it? — but the much bigger problem is purely human.  After all, no one wants to spoil a party when everyone is having a good time, and there are always a dozen plausible reasons why this time it’s different and the economy is truly on a new and sustainable flight path.  And so things inevitably get out of control, sometimes disastrously so.

I’m not sure what the answer is here, though certainly a denser web of both regulatory and cultural attitudes oriented toward moderation can help a lot.  But in any case, that’s the question to be answered: how do we credibly bind future regulators to pursue robust countercyclical policies during economic expansions in the face of both legitimate technical problems and the animal spirits of human nature?  Suggestions welcome.