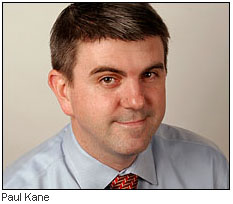 In the Washington Post today, Paul Kane and Shailagh Murray wrote this:

Democrats are sure to incite Republicans if they adopt a shortcut that would allow them to pass major health-care and education bills with just 51 votes in the Senate, where Democrats are two seats shy of the filibuster-proof margin of 60 seats. The rule, known as “reconciliation,” would fuel GOP charges that Obama has ditched bipartisanship.

“If they exercise that tool, it’s going to be infinitely more difficult to bridge the partisan divide,” said  Sen. Olympia J. Snowe (Maine), who was one of three Republicans to support the economic stimulus plan.

Media Matters took them to task for failing to note that Republicans themselves — including Snowe — have used reconciliation in the past, most notably to pass George Bush’s 2001 tax cuts.  The lefty blogosphere piled on, and this afternoon, in an online chat, someone asked Kane if he wanted to defend himself.  He replied:

Someone tell Media Matters to get over themselves and their overblown ego of righteousness. We reported what Olympia Snowe said. That’s what she said. That’s what Republicans are saying. I really don’t know what you want of us. We are not opinion writers whose job is to play some sorta gotcha game with lawmakers.

That’s what columns and blogs are for. Look, Republcians will take reconciliation as a serious poison pill to Obama’s so-called bipartisan/post-partisan era. The Republicans did this, in the most direct correlation, with welfare in the mid-90s. And Democrats took it as a vicious partisan maneuver.

That’s what is happening, that’s what we reported.

Feisty little devil, isn’t he?  But here’s the question: are Post reporters obligated to mention past Republican support for reconciliation every single time they quote a Republican who now opposes it?  Here’s the Post’s history over the past couple of weeks: they ran a roundtable on the subject in March that gave space to all sides; Shailagh and Kane themselves wrote a feature about reconciliation last week which dutifully pointed out that Republicans have used it in the past; and over the same period there have been several other pieces in the Post that mentioned reconciliation in passing, some of which brought up previous Republican support and some of which didn’t.

Is that kosher?  Or does it need to be included in every single story?  I’m hard pressed to believe that it does, any more than, say, Barack Obama’s primary opposition to a healthcare mandate needs to be religiously brought up every time a healthcare story mentions the subject.  Or, more to the point, the fact that Democratic opposition to reconciliation when Republicans were running the show has now morphed into support.  Let’s face it: if reporters are required to spotlight every single instance of hypocrisy whenever they quote a politician, there won’t be room in their stories for anything else.

So, sure, reporters ought to hold Republicans like Snowe accountable.  But I’m not sure I see the case for insisting that they have to do it in every single piece they write.  It’s a history of one-sidedness that’s a problem, not the fact that some stories contain more detail and context than others.

By the way, Kane’s entire online chat is worth a read.  His answer to the reconciliation question wasn’t a sudden outburst of spleen against liberals.  He gives as good as he gets with everyone.  Besides, anyone who refers to Alberto Gonzales as “Fredo” can’t be all bad.

(On the other hand, his answer to the question about defense spending was pretty incoherent. He definitely seemed a little unclear on the concept.)