Richard Scott is rich, conservative, and hates universal healthcare.  He’s all about “patients’ rights,” you see, and intends to spend a big chunk of his fortune making sure people know it. 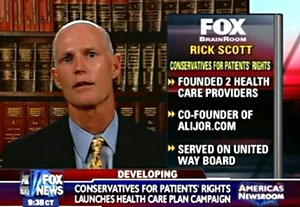 But if he intends to play the role of shady financier to the anti-reform crowd — well, that’s fine by me:

Once lauded for building Columbia/HCA into the largest health care company in the world, Mr. Scott was ousted by his own board of directors in 1997 amid the nation’s biggest health care fraud scandal.

….“He’s a great symbol from our point of view,” said Richard J. Kirsch, the national campaign manager for Health Care for America Now. “We cannot have a better first person to attack health care reform than someone who ran a company that ripped off the government of hundreds of millions of dollars.”

Conservative health care activists, while glad to have a potential ally willing to spend $5 million out of his own pocket, are not fully embracing Mr. Scott….“I just don’t understand why he would be a messenger people would listen to,” said Charles N. Kahn III, who was a senior executive with the insurance industry group that ran the “Harry & Louise” advertisements credited with helping to kill the Clinton plan 15 years ago but who is working for a deal now. “I don’t think people are waiting to hear from him.”

….Mr. Scott has said his sole policy interest is to see to it that whatever overhaul Mr. Obama and Congress consider does not move the country toward a socialized system and away from what he calls his four pillars of reform: “choice, competition, accountability and personal responsibility.”

Ah, yes: competition and accountability.  Let’s talk about that, shall we?  Or, rather, let’s outsource it to our very own Blue Girl, who just happens to have worked at HCA back when they were bilking the taxpayers out of millions of dollars.  If you want to know how they did it, she’s got the story right here.  It was simple!  And it’ll remind you of Enron, IndyMac, AIG, and all the other bright lights of competition and accountability in corporate America that we’ve come to know and hate.

And for a real zeitgeist blast, there’s also this: Scott steadfastly maintains that he did nothing wrong, and for his current venture he’s hired the same PR firm that represented Swift Boat Veterans for Truth in 2004.  Central casting could hardly do better.  The wingers really know how to pick ’em, don’t they?