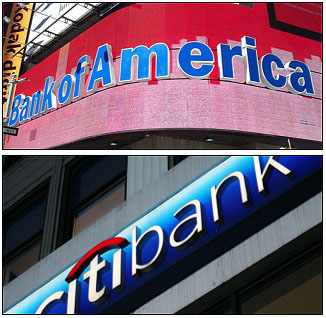 The Treasury plans to release the broad results of its stress tests on Friday.  The New York Times reports:

Analysts are already betting that the stress tests will show that banks need to raise significant amounts of new capital, as profits made in the first three months of the year give way to more losses, tied to credit card, commercial real estate and corporate loans. An assessment by [Keefe, Bruyette & Woods], which calculated its own stress test for the industry, concluded Thursday that United States banks might need as much as an additional $1 trillion in capital.

As part of their exam, regulators have been poring over bank balance sheets to spot financial problems that may not surface for months. Officials are assessing the financial condition of the banks based on their potential losses and earnings over the next two years. That is why some banks that recently announced blockbuster earnings may still need to raise sizable amounts of fresh money.

As the dust settles from the shakeout on Wall Street, the 19 banks subject to stress tests are starting to divide into three groups: the strong that can weather the storm; the weak that will need new, perhaps significant, support; and the ones on the verge, whose fate will be decided by regulators.

I’m still shaking my head trying to figure out how this is going to work out.  If KBW is right — and their estimate certainly seems to be in the right ballpark — and a substantial fraction of that capital turns out to be needed by half a dozen of the biggest banks, where is it going to come from?  The Times report is very antiseptic, but it’s a fantasy to think that any bank “on the verge” will be able to raise private capital, and the Treasury’s TARP money is nearly exhausted.  So then what?

The next couple of weeks are going to be very interesting.  If this report is even roughly accurate, I really have no idea how Tim Geithner is going to tap dance his way around the N-word much longer.