President Obama’s speech at Notre Dame yesterday is another sign that pro-lifers are slowly winning the political battles over abortion. 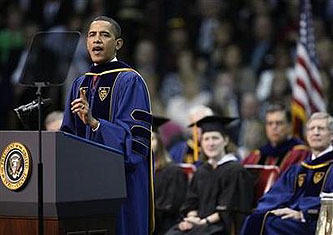 It was not the speech of a man who is confident that his position is right and popular….He didn’t try to make the case for his views on abortion and related issues. He just plead for mutual understanding, civility, and the search for common ground.

….Pro-lifers often get annoyed when they see politicians with hard-line records in favor of legal and subsidized abortion talk, as Obama did, about how much he wants to reduce abortion. But that type of rhetoric, however little follow-through it generates, is itself a concession to the moral and political force of the pro-life case. The more politicians who favor unrestricted, subsidized abortion talk about what a tragedy it is, the more they undermine their own premises. If it’s such a terrible thing, why fund it? Why not allow states to try different methods of discouraging it, including restrictions?

On one point, I think Ponnuru is right: some liberal politicians do have a habit of overdoing the “tragic, heartbreaking decision” rhetoric.  To the extent that this is a reflection of reality for the way some women feel, it’s fine.  But it also shapes reality, and when it gets repeated too often it suggests that abortion should be a tragic, heartbreaking decision.  As Ponnuru says, that’s inevitably a concession to the pro-life worldview.

The rest of his argument is flimsier, though.  Did Obama fail to make a positive case for reproductive rights?  Sure, but that’s not a sign of weakness, just a sign of common sense and basic civility.  He was at Notre Dame, after all.  He wouldn’t deliver a stemwinder about abortion rights on the steps of the Vatican either.

As for Obama’s rhetoric about wanting to reduce abortion, that’s been practically the party line in Democratic politics at least since Bill Clinton codified it as “safe, legal, and rare.”  Dems have been talking that way for years and years now, and regardless of what you think about it, there’s little evidence that it’s a defensive reaction to long-term change in public opinion on abortion.  That’s because there hasn’t been any noticeable long-term change in public opinion on abortion.  Rather, it’s a standard piece of political positioning designed to appeal to one group while not inflaming too many others.  There’s really nothing very unusual about this.

Obama obviously feels that he (and the Democratic Party) can benefit by turning down the volume on the culture wars and marginalizing the extremist wing of the conservative movement.  Time will tell if he can do it.  But that’s an aggressive pitch to broaden the Democratic tent, not a defensive crouch.