Yesterday, after reviewing the problems with a carbon tax, I asked why anyone would support going down that road vs. supporting a cap-and-trade plan.  Andrew Sullivan responds:

Because we actually believe that a carbon tax will bring green benefits without the kind of crude regulatory scheme that could stigmatize environmentalism for a long time? Because we think it will work better?

This deserves some unpacking.  For starters, you need to think about the kind of regulation and oversight that’s required to reduce carbon emissions.  Take power plants, for example. 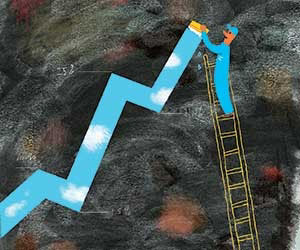 First you have to have technology in place to monitor carbon emissions from each plant, and then you have to have a regulatory bureaucracy in place to make sure the monitoring takes place properly.  That’s a big job.  Once that’s done and we know how much carbon is being emitted, plants have to either (a) pay a tax for each ton of carbon or (b) buy a permit for each ton of carbon.

The difference there is tiny.  You can pay the tax or you can buy permits on an electronic carbon exchange.  From the point of view of the plant, they each require about the same amount of work.

The carbon exchange itself, of course, does need to be set up and kept in operation by a government agency.  That’s extra work compared to a tax, and it has to be done right.  Still, this is hardly untrod territory.  There are hundreds of electronic commodity exchanges around the world and we know how to set one up.  In fact, we’ve done it before for other cap-and-trade programs, and the operation of the exchange itself has never been that big a deal.

So far from being a “crude regulatory scheme,” it’s actually pretty elegant.  Emitters can buy permits depending on their needs while companies that make big cuts and have excess permits can sell them.  In terms of overhead at the corporate level it’s hardly different from a tax at all.

Overall, the idea that cap-and-trade requires some kind of monstrous bureaucracy that a tax avoids simply doesn’t stand up to scrutiny.  Most of the bureaucracy is dedicated to monitoring and enforcement, and you have that no matter what.  And cap-and-trade has the advantage of setting a cap and deriving the permit price from that, rather than letting Congress set a tax rate that will (supposedly) produce a suitable cap.  The former is relatively transparent, since the cap level is right in the legislation and the public knows precisely what it is.  The latter isn’t, since the public has to decide which expert is right about the tax level needed to reduce emissions to the desired level.  The scope for fiddling and lying and delaying on this score is obviously immense.

As for vulnerability to loopholes and special interest breaks — well, both plans are about even on that score.  It’s simply naive to think that either one will be more immune than the other.  Horsetrading is what politicians do, fine print is what lobbyists specialize in, and eternal vigilance is the only way to keep them under control.

In the real world, cap-and-trade requires Congress to set a transparent cap.  It uses a mechanism that’s straightforward and proven.  It puts us in sync with Europe, which is already committed to cap-and-trade and has no interest in the tax approach.  And it’s politically feasible.  Simply put, that’s why it’s the better approach for anyone who’s serious about real-world results.

POSTSCRIPT: Mike O’Hare has a longer and more technical defense of a carbon tax here.  For now, let me just say that I disagree profoundly with his political analysis.  He’s right that cap-and-trade is no cheaper than a tax (and it would be dishonest to imply otherwise), but I think he’s wrong to believe that setting the proper tax level is easier and more efficient than setting the cap level directly.  From the point of view of both politics and public support, I think it’s exactly the opposite.

More later on this, perhaps.