Martin Wolf has a bit of an odd column today.  His basic point is that financial bubbles are generally caused by too much borrowed money:

At the heart of the financial industry are highly leveraged businesses….In a highly leveraged limited liability business, shareholders will rationally take excessive risks, since they enjoy all the upside but their downside is capped: they cannot lose more than their equity stake, however much the bank loses. In contemporary banks, leverage of 30 to one is normal. Higher leverage is not rare. 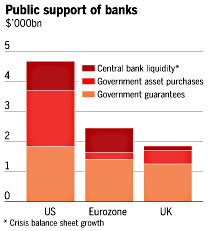 Rational creditors would then charge a premium for lending to higher-risk operations, leading to lower levels of leverage. One objection is that creditors may be ill-informed about the risks being run by banks they are lending to. But there is a more forceful objection: many creditors are protected by insurance backed by governments. Such insurance is motivated by the importance of financial institutions as sources of credit, on the asset side, and suppliers of money, on the liability side. As a result, creditors have little interest in the quality of a bank’s assets or in its strategy. They appear to have lent to a bank. In reality, they have lent to the state.

So far, so good. Even rational managers and shareholders have a big incentive to take outsize advantage of cheap money if it produces many years of great returns and only occasional big losses.  Ditto for lenders — especially if, in the case of catastrophe, they can expect to be protected by central bank guarantees of various sorts.  But then the column ends with this:

The unpleasant truth is that, today, the incentive to behave in this risky way is, if anything, even bigger than it was before the crisis. [Yikes! –ed.]

Regulatory reform cannot end with incentives. But it has to start from incentives. A business that is too big to fail cannot be run in the interests of shareholders, since it is no longer part of the market. Either it must be possible to close it down or it has to be run in a different way. It is as simple — and brutal — as that.

Wolf’s focus on abuse of leverage is right on target, as is his observation that regulation by itself isn’t enough to stop it.  Regulators will inevitably become captured, banks will figure out ways to get around them, and politicians will do nothing to stop it since that would run the risk of hurting the economy with an election coming up.  (And there’s always an election coming up.)

So what’s the answer?  The academic paper that inspired the column suggests that reforming executive compensation in the financial sector is part of the answer, but Wolf himself doesn’t really follow that up.  So we’re not left with much.  Saying that big banks “cannot be run in the interests of shareholders” is a provocative statement, but following that up by suggesting only that they need to be “run in a different way” isn’t a very provocative response.  Perhaps this column was a season finale cliffhanger and we have to wait until next week for the mind blowing conclusion?