Over at the League of Ordinary Gentlemen, liberal Dan Miller jumps into a conversation about healthcare:

There’s a vast policy apparatus on the progressive side of the aisle built around health care, with industrious wonks digging into every nook and cranny. 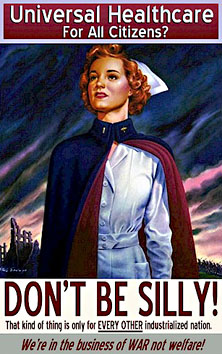 Meanwhile, the right has…nothing….The right has basically abdicated its role in the conversation.  It has not and as far as I can tell will not treat health care reform as any kind of priority—every major player on the right is sitting on the sidelines.  If we’re lucky, we’ll get two GOP Senate votes.  And this after not one but two elections in which the right was beaten by historic margins.

Why is this?  Sometimes it’s worth backing up a bit and looking at the fundamentals.  And we have two fundamentally incompatible desires here: the American public supports universal healthcare.  Conservatives support a free market approach to healthcare.  Unfortunately, the free market doesn’t do universal.  That’s why, for things like roads, national defense, the postal service, and old-age pensions — all of which we’ve decided ought to be available to everyone — we let the government do the job.

So if you want universal coverage, the government has to be involved.  Still, this doesn’t necessarily mean the government literally has to provide healthcare to everyone.  If you want a more limited government solution you could instead fund healthcare only to the 47 million uninsured.  Since everyone else is already covered, that would effectively make healthcare universal.  Unfortunately, there’s a problem with this too.

Let’s take an analogous case: food stamps.  The government doesn’t try to provide food to everyone, only to those poor enough that they can’t get it on their own.  But what’s to stop everyone from lazily quitting their jobs and living off food stamps?  Answer: you’d have to accept being poor.  There are some people willing to do that, but most of us aren’t.  So it’s a manageable problem.

But healthcare is different because most of us don’t buy it directly out of our own pockets.  We get healthcare insurance from our employers.  So suppose the government stepped in to help out just the uninsured.  What would happen?

Well, for starters, the program could be limited just to the poor.  But that wouldn’t make it universal since there are plenty of non-poor who don’t have health insurance and can’t get it through the private market.

No, we’d have to simply offer it to anyone who was uninsured, subsidizing the poor and charging full price to everyone else. But what would happen then?  Answer: employers would start dropping health coverage for their employees.  Why wouldn’t they, after all?  Unlike the food example, where there are personal incentives against being lazy and living off the government dole, employers have no reason to hold back.  As long as a decent alternative is available, their incentive is to get out of the healthcare business, hand over the money they save to their employees, and tell them to sign up for the government program.  Before long, the government would be funding a huge portion of the private insurance market.

And what about insurance companies?  Well, if we’re relying on them to insure the people who aren’t covered by their employers, they need to take all comers.  Coverage is supposed to be universal, after all.  This means that even people with expensive pre-existing conditions need to be included, and they need to be included at a reasonable price.  That’s yet more regulation.

I could keep going, but you get the idea: by the time you’re done you have a web of regulation so tight that you basically have the same same plan liberals offered up in the first place.  The only way to make healthcare universal is either to have the government fund it or to turn private insurers into little more than regulated utilities.  Either way, it’s not a free market solution.

This, then, is the fundamental conservative problem: you can either have universal coverage or you can have a quasi-free market.  There’s no way to have both, but no one is willing to say publicly that it’s OK to leave millions of people without healthcare.  So instead conservatives hem and haw and nibble around the edges with things like HSAs and tax exclusions, even though these ideas don’t do anything to make healthcare coverage more widely and securely available.  No free market solution can do that.

But that’s what the public wants.  And so conservatives are stuck.