The New York Times reports that Asian stock markets are down and the rest of the world is following:

“It’s almost an Asian flu that the markets caught today,” said Art Hogan, the chief markets analyst at Jeffries & Co. “Creeping into the conversation now is, when do we see top-line revenue growth? When is the consumer going to take over from government stimulus? But the answer is consumer data has been less than spectacular.” 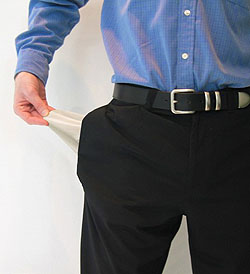 Eventually, recovery has to be fueled by consumer demand, and it’s just not clear where that’s going to come from.  Rising middle class wages?  Nope.  More credit card borrowing?  Obviously not.  Drawing down savings?  Just the opposite is happening.  Tapping into home equity?  Forget it.  Neil Irwin sums things up in the Washington Post today:

“Credit fuels housing. It fuels consumer durable goods. It fuels business investment. It’s in every part of the economy,” said [Carmen] Reinhart, an economist at the University of Maryland. “Credit makes recessions after a financial crisis longer, and all the signs are that [it] is happening this time as well.”

A related head wind comes from American consumers. The financial crisis and recession are reversing a 30-year trend carrying Americans toward a high point in debt. The ratio of consumer debt to the nation’s total economic output rose to 97 percent in the first quarter of this year from 45 percent in 1975.

Currently, Americans are saving more and paying down debt; the savings rate was 1.2 percent of disposable income in early 2008. By the second quarter of this year, that rose to 5.2 percent.

“The household sector has never been so stressed,” said RGE Monitor Chairman Nouriel Roubini, who predicted the crisis and recession. “Savings has to go much higher, and that is going to slow growth of consumption even once incomes start growing.”

Every dollar that Americans save is one fewer dollar for consumption, which means less economic output. When the savings rate goes up by a percentage point, spending decreases by more than $100 billion, according to the McKinsey Global Institute.

My Netroots Nation panelists might have all broken my heart by not opposing the reappointment of Ben Bernanke, but they were also unanimous in calling for a second stimulus.  Politically, that’s not in the cards right now, and I think it’s defensible to suggest that we wait for the current stimulus to really kick in before considering a new one anyway.  Still, even if the worst is over, no one has been able to point to a mechanism that will cause consumer demand to grow significantly over the next few years, and without that we have a very long, very swampy slog ahead of us.  Until the debt overhang goes away and middle class incomes start to rise, the U.S. economy is going to stay fragile and vulnerable to shocks.  It’s hard to see much of a silver lining here.