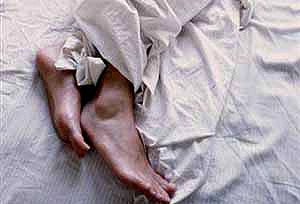 Why is restless leg syndrome always the poster child for people who hate pharma advertising?  Both my fiance and I clearly have it, and you know what?  It’s really not very much fun not being able to sleep, nor are the cramp-like sensations that accompany the uncontrollable urge to kick your legs.

I’ve wondered about this too.  Is it just because it’s kind of funny sounding?  I don’t have it myself, but I have a friend with RLS and he tells me he can barely sleep in the same bed with his wife when it’s acting up because it’s so violent.

Actually, though, the answer doesn’t seem to have much to do with whether RLS really exists.  It’s more about whether pharmaceutical companies are vastly overestimating its incidence in order to sell more drugs.  In Britain, for example, GlaxoSmithKline got in trouble for promoting an off-label use of one of their products for RLS:

Dr Des Spence, the Glasgow GP who raised the complaint, said the case was an example of the way pharmaceutical companies used patient groups to promote a new condition, and then supplied drugs to treat it.

“The Ekbom Support Group was hijacked by GSK to promote restless legs syndrome and the GSK drug ropinirole,” he said. “I am not saying some people do not experience pain and restless legs but claims on the website that it is a widespread and serious condition are disproportionate.”

The Ekbom Support Group says 5% of the population suffer from the condition. Doctors say fewer than 3% experience symptoms on a regular basis and, of them, only a minority require any treatment.

This is the great gray area of pharmaceutical advertising, of course.  On the one hand, letting people know about a condition and a possible new way to treat it is perfectly fine.  On the other hand, we’re all natural hypochondriacs, and it’s all too easy to convince millions of people whose legs twitch a bit that they have a serious disease.  In fact, most of them just have legs that twitch a bit.

Anyway, the lesson here seems to be (a) RLS is real but (b) you probably don’t have it.  What the policy response to this should be I’m less sure of.