Let’s revisit the boiling frog controversy, shall we?  Basically, it’s an urban legend: it says that if you toss a frog in a pot of boiling water, it will jump out (or try to).  But if you put it in a 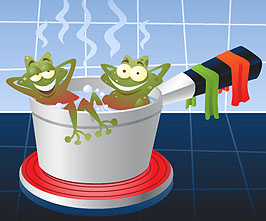 pot of cold water and turn up the heat slowly, it will sit idly by as it boils to death.  Turns out it’s not true, though: the second frog will indeed try to jump out when the water temperature gets too high.

So why the persistence of the legend?  If it’s such a useful metaphor, why don’t we have any good substitutes?  Well, James Fallows, who started all this, says we do.  For example, people with cats slowly get accustomed to the smell of a litterbox in their home:

So, to answer Kevin Drum’s question: we don’t cling to the frog story, even knowing it’s false, because there is no possible other illustration from the realm of shared human experience that would illustrate progressive desensitization. The litterbox problem is one that is actually true — and I bet a million times more people have experienced it than have actually seen a boiled frog. There’s some other psycho/linguistic reason why the boiled frog story has caught on. But for the moment, this is my candidate for a new image: the reeking kitty-litter box. If someone has a better candidate, great.

Two similar suggestions are here.  But there’s a problem: none of them are a substitute for the boiling frog.  The difference is simple.  In the case of the litterbox, we’re slowly acclimating to something unpleasant.  There are a million examples of humans doing this.  But the frog is doing something else entirely: it’s dying.  Nobody ever died from an overripe litterbox.

That’s the power of the frog metaphor.  Not merely that we can get used to unpleasant things, but that we’ll literally allow ourselves to be killed as long as the pain is turned up slowly enough.  And that’s not all: not only will we die, but we’ll hardly even notice that it’s happening.

Now, I’d argue that the reason there are no good substitutes for the frog metaphor is because this never happens1.  No normal animal, human or otherwise, will fail to react to death-inducing pain.  Period.

So that explains that.  But we’re still left with a question: why then is the boiling frog metaphor so popular and enduring?  If, despite being technically wrong, it were a genuinely useful illustration of a rare but not unheard-of human condition, that would be one thing.  But it’s not.  So what gives?

That’s a little more difficult, but I think I’d chalk it up to the common human desire to incite dire fear about things we dislike.  (This is probably a very rational desire, too, since it’s hard to get people to rouse themselves from their sofas unless you get them pretty riled up.)  So it’s not enough to say, for example, that healthcare reform will lead to higher taxes and a somewhat bigger role for government in our lives, just as it’s not enough to say that post-9/11 security measures will put everyone under a little more scrutiny than we’re used to.  In both cases, we want to make a much more dramatic point: maybe not literally death, but the end of freedom as we know it.  The frog is a pretty useful and homey way of illustrating it.  The boiling frog is the demagogue’s best friend.

1Climate change (and related slow-motion catastrophes) may seem like examples of this, but they aren’t.  Even if climate change does end up killing a lot of people, it won’t be because we never noticed the pain it was causing.  Just the opposite: it’s because the pain is too subtle to notice.  If it ever gets to the point where we’re all genuinely suffering and we know the source, we’ll notice it and try to do something about.  It might be too late by then, but we’ll try.