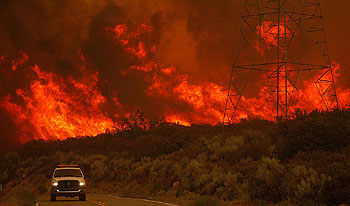 At last year’s Netroots Nation I ran into CAP’s Brad Johnson one day, and he told me that one of the consequences of global warming was increased wildfire activity in California.  I wasn’t sure I really believed that, so he promised to send me some stuff to read.

Well, he did, and I read it, and he was right.  I blogged on that shortly afterward, and with fire season on us once more it’s worth writing about again.  Roughly speaking, it turns out that land use issues are probably responsible for about half of the increase in western wildfire activity over the past few decades and climate change is responsible for the other half.  The mechanism is pretty straightforward: higher temperatures lead to both reduced snowpack in the Sierra Nevadas and an earlier melt, which in turn produces a longer and drier fire season.  Result: more and bigger fires.  Plus there’s this, from CAP’s Tom Kenworthy:

In recent years, a widespread and so far unchecked epidemic of mountain pine beetles that has killed millions of acres of trees from Colorado north into Canada has laid the foundation for a potentially large increase in catastrophic fires. Climate change has played a role in that outbreak, too, as warmer winters spare the beetles from low temperatures that would normally kill them off, and drought stresses trees.

In the western United States, mountain pine beetles have killed some 6.5 million acres of forest, according to the Associated Press. As large as that path of destruction is, it’s dwarfed by the 35 million acres killed in British Columbia, which has experienced a rash of forest fires this summer that as of early this month had burned more than 155,000 acres. In the United States to date about 5.2 million acres — an area larger than Massachusetts  —have burned this year.

It’s a frightening prospect, as British Columbia’s Forests Minister Pat Bell told an International Energy Agency conference last week. “I am not a doomsayer,” said Bell. “I am not one who wants to say we are beyond the tipping point. But I am afraid that we are getting close to that.”

Today, 100,000-acre conflagrations that take two weeks to contain and kill three or four firefighters along the way are perfectly normal here in Southern California.  They weren’t when I was a kid. This is partly due to global warming, and it’s something that’s happening now — not in 2050 or 2075 or 2100.  And it’s only going to get worse if we don’t do something about it.