Over the weekend the New York Times ran a long story about E. coli poisoning in the hamburger industry.  I could swear I’ve read nearly this exact same story three or four times before and it never seems to prompt any actual changes in the meatgrinding industry, but maybe this time we’ll get lucky.  For Saturday’s story, the Times tracked down the infected hamburger that paralyzed 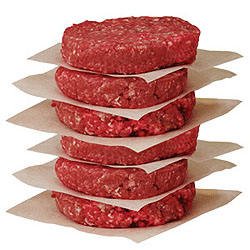 Stephanie Smith two years ago, and what they discovered was that meat grinders don’t test the various ingredients that go into making hamburger.  They only test the final product:

When it came to E. coli O157:H7, Cargill did not screen the ingredients and only tested once the grinding was done. The potential pitfall of this practice surfaced just weeks before Ms. Smith’s patty was made. A company spot check in May 2007 found E. coli in finished hamburger, which Cargill disclosed to investigators in the wake of the October outbreak. But Cargill told them it could not determine which supplier had shipped the tainted meat since the ingredients had already been mixed together.

“Our finished ground products typically contain raw materials from numerous suppliers,” Dr. Angela Siemens, the technical services vice president for Cargill’s meat division, wrote to the U.S.D.A. “Consequently, it is not possible to implicate a specific supplier without first observing a pattern of potential contamination.”

Did Cargill do this to save money?  Only partly.  Primarily it’s because if they test, they might actually find something:

The retail giant Costco is one of the few big producers that tests trimmings for E. coli before grinding….Costco said it had found E. coli in foreign and domestic beef trimmings and pressured suppliers to fix the problem. But even Costco, with its huge buying power, said it had met resistance from some big slaughterhouses. “Tyson will not supply us,” Mr. Wilson said. “They don’t want us to test.

….The food safety officer at American Foodservice, which grinds 365 million pounds of hamburger a year, said it stopped testing trimmings a decade ago because of resistance from slaughterhouses. “They would not sell to us,” said Timothy P. Biela, the officer. “If I test and it’s positive, I put them in a regulatory situation. One, I have to tell the government, and two, the government will trace it back to them. So we don’t do that.”

The USDA has since issued guidelines “urging” grinders to test ingredients, but that’s it.  They don’t require it.  Surely a Democratic administration and a Democratic Congress, not ideologically opposed to safety regulations, can do better than that?