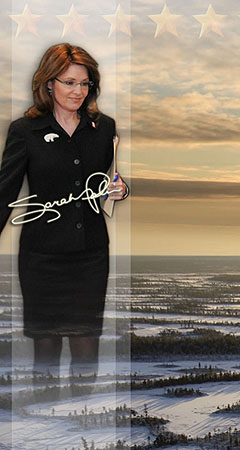 Iowans aren’t accustomed to paying politicians to speak at their events.  Just the opposite, in fact: as the kick-off state for the presidential primary season, most politicians are so eager to speak in Iowa that they’re almost willing to pay for the privilege.

But not Sarah Palin!  She’s hungry for scratch, and Iowans have to pay up the same as anyone else:

A conservative Iowa group’s effort to lure Sarah Palin to its banquet next month has had an unintended effect: Rather than exciting conservatives about the prospect of a visit from the former Alaska governor, the group’s plan to raise a six-figure sum to bring her to the state has GOP activists recoiling at the thought of paying to land a politician’s speaking appearance.

Matt Yglesias is cynical: “The hard-right loves Sarah Palin and wants her to be president, but she really just wants to cash in.” Nick Baumann isn’t so sure: “Running for President does mean sucking up to Iowans, and if Sarah Palin isn’t willing to do that, she either has an outrageously inflated sense of her own importance or she isn’t planning on running. You can probably find evidence for either of those explanations.”

Why yes you can.  Or both!  As for myself, I go back and forth on whether Palin plans to run for president in 2012.  At times, it really does seem as if the 2008 campaign made her realize that the rigors of big-time politics weren’t for her.  On the other hand, she really, really loves the spotlight, and what’s a bigger stage than the White House?  But if she planned to run, would she really be quite so obviously frenzied about cashing in on her notoriety while she has a chance?  Still, Nick is right: her sense of self-importance is so manifest that you can practically see her measuring the Oval Office drapes when she makes public appearances.  But surely her advisors know perfectly well that she has absolutely no chance of beating Barack Obama and will let her know that?  Maybe so, but that might just mean she’ll find herself new advisors.  The ability of people to convince themselves that they can win the presidency (Fred Thompson?  Chris Dodd?  Seriously?) is the stuff of legend.

So I don’t know.  I’d put it at about 50-50.  Or maybe 45-55.  If I had to bet, I’d say she won’t run.  But I wouldn’t bet very much.  Give her another year or two and she might very well delude herself into thinking that the American people are really, really yearning for her to be the leader of the free world.  After all, they love her book, don’t they?

POSTSCRIPT: If you want to know the truth, this post is really just an excuse to include that picture of Palin, captured some time ago from her old Twitter page.  It cracks me up.  The first time I saw it she reminded me of some Paul Bunyanesque giant gazing down curiously on the antlike peasants below — perhaps just before rampaging over the Alaskan tundra and crushing a few villages in the process.  Or maybe I just have an odd sense of humor?

UPDATE: As is so often the case with Palin, it turns out that the real story here is murky.  Is she really asking for $100,000?  Is she even planning to be in Iowa at all?  Maybe not.  More here.