Last night at a roundtable for our nations’s elite, that is to say, “bloggers,” Richard Trumka, AFL-CIO President, implied, though did not say outright, that one consequence of the real estate bubble was that manufacturing and other types of businesses were finding it difficult to obtain credit at favorable terms. As I said, this seemed to be the gist of what he was saying though I’m not 100% sure that was his point. So I’m curious! How much was credit being funneled away from all other sectors in the economy?

I’d like to know too, though I’m not sure what the best measure of this would be.  But I’ve always thought that one of the most worrisome aspects of the recent credit bubble was the fact that it was at least partly driven by Ben Bernanke’s famous “savings glut,” big pools of money from Asia looking for a home.  Unfortunately, there weren’t enough genuinely productive invesment opportunities to soak up all that money, so instead it ended up on Wall Street where it got funneled into a housing bubble and lots of financial engineering.

But why weren’t there enough good, traditional places to invest that money?  And by “traditional” I mean people who want to build factories or expand call centers or start up biotech ventures.  That is, businesses that provide goods and services to meet demand from consumers and corporations. 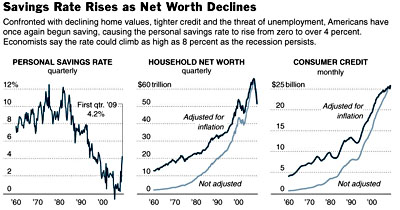 The supply side of the economy may have been going great guns, but the demand side wasn’t keeping up.  This is why some people think it’s better to talk about this phenomenon as an “investment drought.”

A lot of this has to do with the distribution of income that Steve Randy Waldman blogged about the other day: demand for goods and services is primarily driven by consumers, and if their wages aren’t increasing then demand for goods and services can’t increase very much either.  So instead excess money flows to Wall Street, where it gets loaned out to consumers as a substitute for wage growth.  Eventually, though, it becomes obvious that they can’t take on any more debt, and then comes the crash.

So what happens next?  If we want stable growth, it really needs to be based on consumer demand, and that in turn mostly means middle class demand.  That demand will then provide investment opportunities for capital.  But that all depends on broad, sustained wage growth for the middle class, and as far as I can tell no one is talking much about how to promote that.  If that stays the case, and income inequality continues to rise once we’re out of the woods, how far out can another crash be?