As you probably know by now (you have been paying attention, haven’t you?), banks are required to retain a certain amount of capital on their books.  The capital is there to keep them solvent even if their assets lose value, so the amount they’re required to have depends on how risky their assets are.  If they have, say, a bunch of crummy C-rated securities on their books, they have to maintain a full load of capital to back them up.  But A-rated securities are less likely to lose value, so for those they only have to maintain 50% of the normal capital levels.  And for AAA securities, they can get by with only 20% or less.  After all, AAA securities are pretty unlikely to lose value.  Right?

This was one of the reasons behind the CDO frenzy of the past few years.  If you slice and dice a bundle of securities so that most of them are AAA-rated, then you can reduce the capital you need to back them up, which frees up that capital for other uses.

But then everything came crashing down, the ratings on those bundles tumbled, and suddenly banks had to pony up more capital to back them up.  What to do?  Answer: slice ’em and dice ’em all over again.  Welcome to the re-remic: 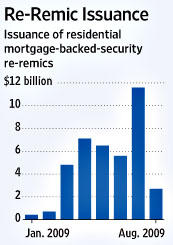 The way it works is that insurers and banks that hold battered securities on their books have Wall Street firms separate the good from the bad. The good mortgages are bundled together and create a security designed to get a higher rating. The weaker securities get low ratings.

….A hypothetical example cited in research by Barclays Capital said that a $100 million asset that required $2 million in capital at a triple-A rating may require $35 million if downgraded to double-B-minus. At triple-C, the capital requirement might rise to 100%, or $100 million.

In a re-remic, three-fourths of the same asset may regain a triple-A rating, requiring just $1.5 million in capital, Barclays said. The remaining one-quarter may require 100% capital, but the total capital requirement would fall to $26.5 million.

….”There is $350 billion to $400 billion in market value of securities with no natural buyer due to their rating,” Barclays said in a June report. “The re-remic market provides a way out of this gridlock by creating new AAA securities, which are likely to be viewed as attractively priced.”

Shiny new AAA securities!  Hooray!  And there’s more!  Ratings for re-remics come from the same ratings agencies that bollixed up the original ratings.  And investment banks pocket fat fees for performing the financial alchemy.  What could possibly go wrong?