Atrios blogs about the transit workers strike in Philadelphia:

A big problem is that in these situations there often isn’t much solid information about just what are the real issues for the union. News stories focus on wages, and while everyone thinks 50 grand (with some seniority) is a lot for a bus driver, not many of those people are applying for those awesome bus driver jobs. This article provides a bit more of the union’s perspective. 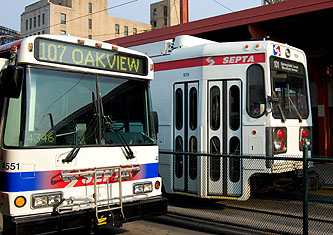 Aside from wages and health care, concerns about pension underfunding and other issues exist.

If I’m reading this right, Atrios is suggesting that the media is at fault here: unions (and mangement) have lots of serious issues at stake when strikes are imminent, but reporters just lazily throw out a few lines about wage demands and move on.  The result is that the rest of us remain fuzzy about what’s really going on.

But I think something else is going on here.  I noticed this a few years ago during the supermarket strike here in Southern California, and I noticed it again a couple of weeks ago reading about the postal workers strike in Great Britain: neither labor nor management is willing to publicly explain exactly what the current contract provides, exactly what the current dispute is over, and exactly what offers each side has laid on the table.  It’s frustrating as hell.  It might also be excellent bargaining strategy (though I wonder about that), but in any case I don’t think the vagueness in press reports is usually the fault of the press.  Their reports are vague either because both sides are hurling accusations at each other but aren’t willing to provide concrete evidence for them, or because neither side will say anything much at all.  Much like a political campaign.

I’m happy to be wrong about this if anyone with more experience can school me on how this stuff really plays out.  But it seems to be a pretty common problem, and it’s a little hard to believe that every single reporter who’s ever covered a strike is just a bored hack too lazy to spend ten minutes getting the facts straight.