Via Alex Massie, the Telegraph reports that Britain’s surveillance state is slated to grow ever bigger and ever broader thanks to proposed new rules that would 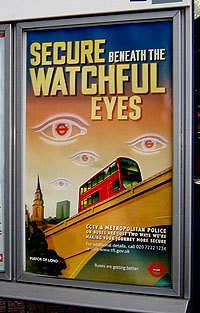 require all telephone and internet hosts to keep detailed records of their customers’ activities and turn them over to pretty much anyone who feels like seeing them:

Despite widespread opposition over Britain’s growing surveillance society, 653 public bodies will be given access to the confidential information, including police, local councils, the Financial Services Authority, the Ambulance Service, fire authorities and even prison governors.

They will not require the permission of a judge or a magistrate to access the information, but simply the authorisation of a senior police officer or the equivalent of a deputy head of department at a local authority.

….Although most private firms already hold details of every customer’s private calls and emails for their own business purposes, most only do so on an ad hoc basis and only for a period of several months.

The new rules, known as the Intercept Modernisation Programme, will not only force communication companies to keep their records for longer, but to expand the type of data they keep to include details of every website their customers visit — effectively registering every click online.

….The latest figures on the use of the RIPA legislation by public bodies, show that state bodies including town halls made 519,260 requests last year — one every minute — to spy on the phone records and email accounts of members of the public.

The number of requests has risen by 44 per cent in two years to a rate of 1,422 new cases every day, leading to claims of an abuse of using the powers for trivial matters such as littering and dog fouling.

519,000 requests in a single year?  That’s more than 1% of the adult population of Great Britain.  Terrorism is the putative reason for the new regulations, but if Britain truly has that many suspected terrorists on its soil, they might as well just give up and surrender now.