A few days ago, riffing on a Tim Duy post, I wondered why, during the past decade, so much investment had flowed into the housing market.  Why didn’t it flow into productive investments instead?  Why did investment in real goods and services suddenly become so much less attractive than housing?

To a certain extent, this is an ill-formed question.  What matters is the relative attractiveness of housing vs. productive investments, and you get the same effect regardless of whether the former goes up or the latter goes down. 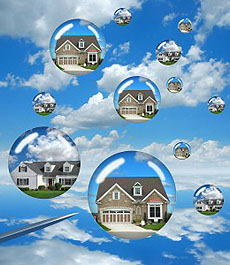 Still, there is a difference, and as Duy points out, investment growth in software and equipment was objectively low during this period.  Mike Konczal takes a crack at explaining why:

One answer to Kevin’s question is because of the terrorist attacks on 9/11, and the financial scandals of Enron and Worldcom, bond markets were scared out of their minds that they might be lending to the next Worldcom. Noah Millman has an excellent description of that situation on the ground related to the beginning of the wave of structured finance. Worldcom is early 2002; people are spooked about the next landmine, and housing always seemed like a safe bet for both consumers, and because of some financial innovations and excellent ratings, for investors.

This sounds roughly plausible.  The dotcom bubble bursts, followed by recession and 9/11, followed by accounting scandals, and suddenly the real world looks like a pretty dangerous place to invest even if interest rates are low.  But there’s still lots of money sloshing around, and it has to go somewhere.  Housing (and property in general) got the nod, this fed on itself, and eventually it spiraled out of control, producing a housing bubble.

Mike’s secondary explanation is that, at the same time the real world got less attractive to investors, housing became more attractive to bankers because “financial innovation, deregulation, ratings agency’s behavior and changes in the repo markets” made mortgage loans more lucrative.  So they began marketing the hell out of mortgages.  This is also plausible.

But plausible is not the same thing is true.  We’ve had recessions before, we’ve had (regional) housing booms before, and we’ve had clever investment bankers before, but they’ve never produced the kind of national feeding frenzy we saw in the 00s.  (Not recently, anyway.)  So, while there’s obviously something to both these arguments, I’d still like to see an effort by economists to try and quantify them.  Is there a way to do that?  Is there a way to somehow disentangle the importance of the decline in attractiveness of real-world investments vs. the rise in attractiveness of derivative-fueled housing investments?  It seems important to me.