Alex Tabarrok relays a suggestion today from climate skeptic Ross McKitrick for a carbon tax that would be tied to changes in global temperatures.  If temps go up, the tax goes up.  If they don’t, the tax stays low.  “In theory, both climate change proponents and skeptics ought to agree to this proposal, but I predict the proponents will object,” Tabarrok says, and sure enough:

Addendum: As predicted most of the objections (in the comments) are from climate change proponents.  In essence, they argue that the problem is so serious that we must act before the evidence is in.  Aside from the obvious epistemic problems with such a position do note that a) this is a way of getting agreement where otherwise there might be none b) the tax can be non-linear so it rises (in Bayesian fashion) with the strength of the evidence, i.e. the tax need not always lag.

I know this is my usual cynicism showing, but I suspect pretty strongly that (a) is just wrong.  Conservatives will never agree to anything like this as long as they’re caught in their current cocoon of base pandering denialism and obstruction.  There might be individual conservatives out in think tank land who are willing to discuss this in an academic fashion, but real-world political conservatives almost unanimously think global warming is a hoax designed to allow liberals to take command of the economy.  As long as that’s the case, I think ideas like this will never gain any traction.

As for (b), the devil’s in the details.  The problem is that temperatures lag CO2 increases, and CO2 stays in the atmosphere essentially forever.  By the time temperatures have actually risen, say, 2°C, CO2 concentrations will already be above 500 ppm and there will be nothing we can do to bring them down.  A big carbon tax at that point will have no effect at all.  We need a tax that anticipates future changes, not one that reacts to them.

So what, then, would “strength of the evidence” mean in practice?  Since CO2 is a precursor to climate change, we inevitably have to rely on models of some kind to predict future temperatures. 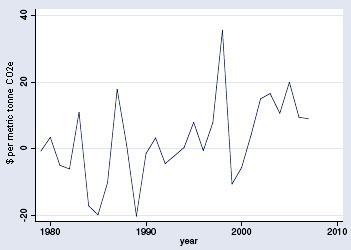 But skeptics don’t trust climate models, so McKitrick proposes instead a relatively simple function tied to a specific measure of temperature increase:

As I said, I don’t think this kind of proposal is meaningful in the current political climate, but as a talking point it could be interesting.  Obviously the precise nature of the tax (how big it is, how sensitive it is to temperature changes, whether it should change annually or be set on the basis of a multi-year moving average, etc.) is all debatable.  But what about the basic idea?  If it were politically feasible, and not just a distraction from real-world proposals, would something like this be a good idea?