Holden Caufield was a miserable punk. It might be an achievement to channel that brand of narcissistic alienation, but there’s no joy to be found in its company. Similarly disappointing was the 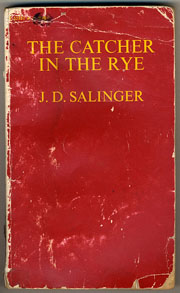 hushed promise that there was something rebellious and titillating in the book. I can’t remember how that reputation was conveyed to me. Maybe my English teacher explained it explicitly, circling “banned” on the green chalkboard. But by the time I got to “The Catcher in the Rye,” there was nothing rebellious about it. As Malcolm Jones writes, “any allure the book might have had as ‘forbidden goods’ was stripped away the day the first English teacher put it on a required-reading list.”

I’m the last person who should be commenting on J.D. Salinger, but my first thought when I read this was that the problem wasn’t so much with the book — or with its status as mandatory reading — but with the fact that Ezra read it around 1999. By then it had lost a lot of what made it original. Will makes this point better than I could:

My defense of Salinger is simple: I think The Catcher in the Rye is the first book that truly captures the vernacular of adolescence. In a media environment that is absolutely saturated with adolescent drama and humor, this may strike you as an unremarkable accomplishment. But The Catcher in the Rye was written just as youth culture was entering into the popular conscious, so Salinger deserves credit for anticipating a pretty significant cultural sea change.

I think that’s right. In 1951, Catcher in the Rye really was rebellious and titillating. By 1974, when I read it, not so much. By 1999, it might as well have been distributed on folio leaves. It’s become part of the high school canon because it’s a book by a serious author that also seems genuinely appealing to teenage kids, and it’s not as if high school English teachers have a huge selection of books like that to choose from. But frankly, it’s probably not all that appealing anymore. By the time most kids get to their first American lit class these days, they’ve already spent half a decade reading stuff exactly like it. Time to revise the canon.