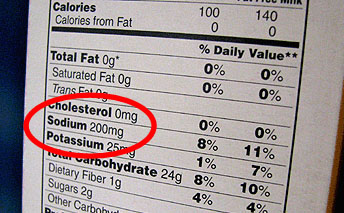 This is old news, but who cares. It’s from New York City and I’m blogging it today anyway:

Mayor Bloomberg and the Health Department have opened a new front in the battle to get New Yorkers, and maybe all Americans, to eat more healthily. The target now is salt.

Commissioner Thomas Farley has forged a consensus among government officials and health advocates that calls on the food industry to reduce the amount of sodium in a wide array of products. The goal is to cut the nation’s salt intake by 25% over five years.

What’s good about the plan is that it seeks to enlist food companies to voluntarily meet the target, and to do so gradually so palates used to a great deal of salt won’t know the difference.

I tend toward high blood pressure, so I generally try to watch my sodium intake. But it’s hard! At breakfast, my cereal has sodium. At lunch, my bread has sodium, my mustard has sodium, and my deli ham has sodium. Pretzels too. Pickles are a great snack, but they have enough sodium to choke a horse. Rice pilaf at dinner? Sodium.

Etc. etc. You get the drift. Now, some of this is unavoidable. Pickles just have lots of sodium. But what about all this other stuff? On the rare occasions that I buy peanuts, I buy the low sodium variety. Guess what? They taste plenty salty. I recently bought a can of “ultra low sodium” tuna. I made a tuna sandwich out of it and couldn’t tell the difference. Danola makes a low sodium ham. Ditto.

So what’s with all the sodium? I’ve never liked packaged mashed potatoes, but the other day a friend of ours suggested we should try a new brand. We did, and she was right: they weren’t bad. Except for one thing: too salty! I was at a nice restaurant last week and had a small piece of chicken that was delicious. One of the best I’ve ever had. Except that it had too much salt.

So here’s my question: why all the salt? Are “palates used to a great deal of salt” really the norm these days? Am I just more sensitive than most people to saltiness? Because it seems to me that you could cut the sodium content of nearly every processed food product in America by half and end up with something that’s not only healthier, but better tasting.1

Obviously, though, the food industry, which spends billions of dollars to figure this stuff out, is convinced their customers think otherwise. Are they right? What say you?

1What makes this especially odd to me is that I don’t generally have a discriminating palate. When it comes to fat and sugar and all the other stuff that’s bad for you, I’m all for it. But salt? I’m ready to cry uncle.